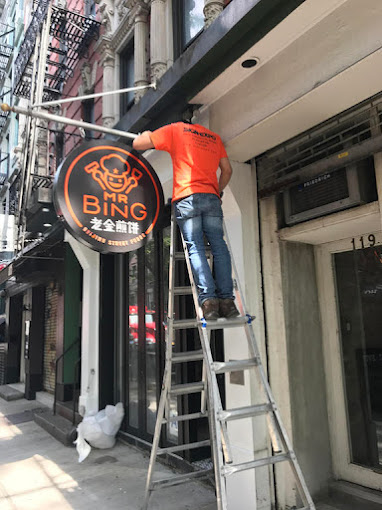 Yesterday morning, workers put up the signage for Mr. Bing at 115 St. Mark's Place between Avenue A and First Avenue.

Mr. Bing has been a regular on NYC's food market and festival scene the past two years, selling jianbing, "scallion- and sesame seed-studded crepes stuffed with eggs and other fillings that are artfully composed on a flat-top grill," as Eater describes the popular street food in Northern China. 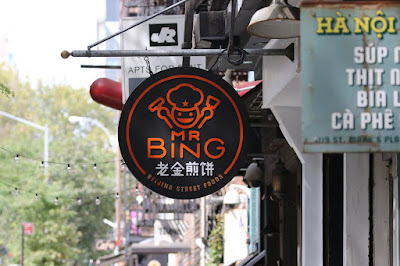 Here's more on Mr. Bing's founder, Brian Goldberg via a piece in the Times back in January:

Mr. Goldberg, a Chinese scholar who grew up in Spring Valley, N.Y., in Rockland County, became a professional luge racer and worked in finance before running a couple of places in Hong Kong. He decided a few years ago to do something, he said, “that would be interesting and make people happy.” He’d like to do his part to make jianbing as mainstream as ramen.

Aside from various pop-up locations, Mr. Bing currently has a presence in the UrbanSpace Vanderbilt food hall ... this appears to be the first traditional storefront for the operation.

Mr. Bing is also on this month's CB3-SLA committee docket for a beer-wine license. (This item will not be heard before the committee.)

The previous tenant at 115 St. Mark's Place, Water Witch Mercantile, closed at the end of 2016 after just two months in business. 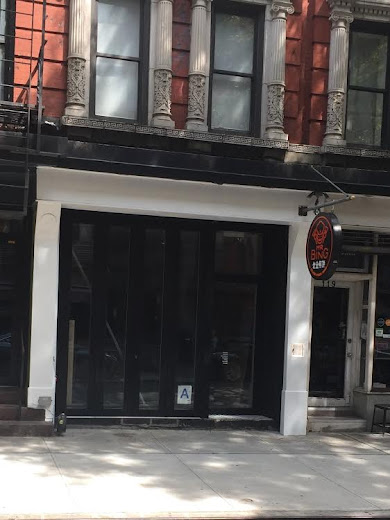 Is anyone else sick of the glut of Asian restaurants, more specifically fast food / dessert places, in the East Village?

I'm sort of sick of it because its all affordable dining. I would like the return of high end fine dining asian in the area, like LAN, Ebisu, Kajitsu, and that sushi place on Avenue A thats now some middle eastern like we had 10-15 years ago.

I'm a 30 year resident of Manhattan and a 27 year resident of the E Village.
I love the affordable and varied Asian eateries on St Marks and in the East Village in general. Change happens but when the change is all upscale it makes everyday life for residents less enjoyable.