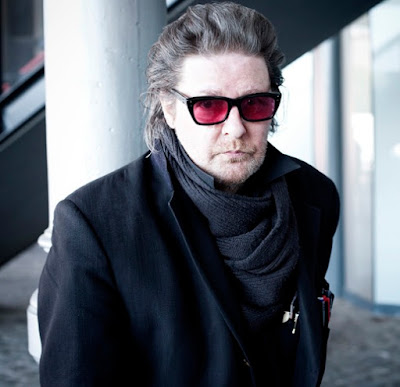 Glenn Branca, the avant-garde composer and guitarist, died yesterday of throat cancer, according to published reports. He was 69.

Reg Bloor, his wife and collaborator, shared this message...


Here's more about Branca via Billboard:

Branca is perhaps best known as a member of New York’s very short-lived no wave scene, which aimed to emancipate punk from the aesthetic trappings of rock 'n' roll. While The Ramones and the New York Dolls brought punk to the public as basically rebranded, updated hippies, Branca and his cohorts had other plans.

By treating listeners to endless drones, austere classical moves or prepared instruments like screwdrivers stuck in guitar strings, Glenn Branca’s basic M.O. never wavered in his decades-long career. And some of the young noisemakers he had in his madcap ensembles — Thurston Moore, Lee Ranaldo, Michael Gira — were listening.

You can find feature obituaries on Branca at Billboard ... Brooklyn Vegan ... and The Guardian.

And a selection of thoughts on Branca via Twitter...

RIP Glenn Branca. Such sad news. I have fond memories of seeing him play furiously in the dank basement of Lit Lounge in the East Village to an audience of less than a dozen people. Glad I got to see him play.


"I was out there playing to a Phil Collins audience and coming home and listening to Glenn Branca," Bowie in 1997, recalling the '80s


And just remember, without Glenn Branca we'd not have Sonic Youth, Swans, and so much music that speaks of such intensity and passion.


The X Magazine benefit in 1979 was perhaps the most amazing series of concerts that I have ever seen.
Glenn Branca, playing with Theoretical Girls was the best band in the program. It changed my life. Sorry I never had a chance to tell him.


Glenn Branca started out giving zero fucks about what people said he could and couldn’t do, and then when his ambition outstripped his ability, he went out and learned, practiced, honed. A genuine artistic hero.


Oh no Glenn Branca died. Goddamit. His music always defined my conception of a kind of New York cool that barely exists anymore


Glenn Branca’s influence on and stewardship of the genre-bending music scene that exploded out of NY in the 70s & 80s can’t be understated. He was a true giant of modern experimental music, and will be sorely missed #glennbranca pic.twitter.com/mIDsBLwxdc


RIP Glenn Branca. This is still the greatest clip on YouTube https://t.co/DG4Um8PO2J

Kurt Cobain would have never knew how to do a guitar solo if it wasn't for Glenn. Goodnight to a guitar god.