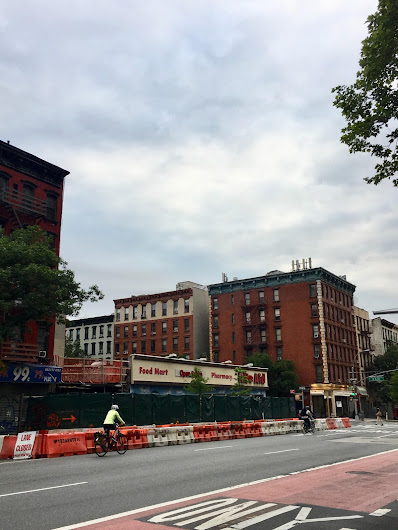 In other bike-related news... District 2 City Councilmember Carlina Rivera, along with advocates and neighborhood residents, is announcing the introduction of a new bill this morning that will require holders of DOT permits that authorize construction or equipment on the street to preserve any impacted bike lanes with a safe and sufficient detour.

This includes any specifically marked bicycle lane, whether it has painted, separated and protected, or a bike path. Any detour bike lane would have to feature protective barriers and be three-quarters the size of the original lane, unless that would make the detour lane less than 4 feet wide. The bill would also require DOT to notify community boards as well as post on their website when any permitted construction impacts a bike lane.

Councilwoman Rivera is pursuing this legislation after hearing about construction projects in her district and elsewhere where bicyclists were being forced out of protected bike lanes and directly into car traffic with little notice right for riders or drivers.

Rivera recently spoke with Streetsblog about this proposed legislation:

You said a specific location in your district spurred you to introduce this bill.

It’s on First Avenue between Fourth and Fifth streets, right on the west side where the bike lane is. There was construction there, and there was no detour. As someone who cycles up First Avenue all the time, I can tell you that as soon as you got to that street, it just said, “Bike lane closed.” So you have to go and venture into the traffic, and you know that First avenue is incredibly busy, not just with [cars], but with the SBS, the M15.

There was no sign. There were no protective barriers. This was something people contacted our office about repeatedly, so we know that we really had to legislate this in order to protect cyclists everywhere.

Council electeds are more concerned with the commutes of bikers and those scooter riding pests than they are with the concerns of the rent-burdened poor, the lack of affordable housing and the scandalous conditions of NYCHA.

i love how the elected official support bicyclists. too bad they don't support enforcing traffic rules onto bicyclists though.

I have to bike through that zone all the time. It's not that big a deal--provided you take a moment to stop and assess traffic before veering out. There are always gaps in car traffic during which you can safely pass. Cyclists can be entitled. Act so put out anytime they have to apply the brakes and kill their precious momentum. Laziness if you ask me.

She's alive! She's alive! Hold the presses!! But, wait... Carlina... Bike lanes? Not zoning protection... not the BClub... not the garbage trucks... not the Crusties... just bikes lanes and only around construction sites. Wow! Our elected official at work for her community. Makes me feel all warm and cozy inside knowing she's got her finger on the pulse of the community. This my friends is the benefit of ONE PARTY RULE.

As any biker knows though constructions sites can be an issue any ride usually includes 2 or 3 cars/trucks parked or pulled over in the bike lane which can only be avoided by riding into traffic. So for me a construction site is just one of many obstacles.

@cmarrtyy Baby steps. Carlina's going to have to work up to challenging sanitation on the garbage trucks and zoning? Bill D'RealEstate wouldn't return anyone's phone calls about NIMBY zoning problems much less a rookie.

She will never challenge him and the Dem party. She's a follower not independent enough and no taste for it - the fight that is.

But her biggest problem isn't the Mayor.. Margaret Chin was nearly primaried out and then nearly lost her election, I believe... Race politics doesn't always trump the reality that people feel underserved.