Demolishing the fire-damaged back extension at Uogashi, which appears to be permanently closed 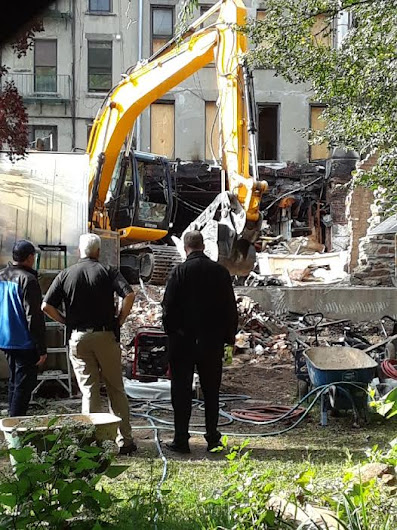 Thankfully only the back extension needed to come down in the aftermath of the six-alarm fire in the early-morning hours of Oct. 3. DOB officials said that the rest of the five-story building was structurally sound.

The Uogashi website now lists "permanently closed" under their hours of operation. The Tree Bistro next door is still temporarily out of commission as well due to damage to their rear garden.

Officials said they believe the fire, which injured 17 people, including 14 firefighters, began in the restaurant. An exact cause has not been made public just yet.

Previously on EV Grieve:
A look at the fire-damaged Uogashi; plus video of when the fire started at 188 1st Ave.

Watch this drone footage of the fire at 188 1st Ave.

[Updating] Report of injuries during major fire at 188 1st Ave.

Report: 188 1st Ave. survives fire; back extension must be demolished
Posted by Grieve at 4:22 AM

These extensions are not only an annoyance for tenants but a hazard for the building. They are encouraged by the DOB, but in my opinion they are NOT legal...rnh141@gmail.com.

Why this restaurant was allowed to build this extension is a mystery to me, since they were never that busy inside to need a space to catch the overflow. I know they tried to appeal to the frat populace, maybe that was where the owners put them so when the bros got too Sapporo-rowdy they wouldn't disturb the adults in the room...

Have there been any updates from Tree Bistro? Really miss them...