Dojo looks to have closed for good 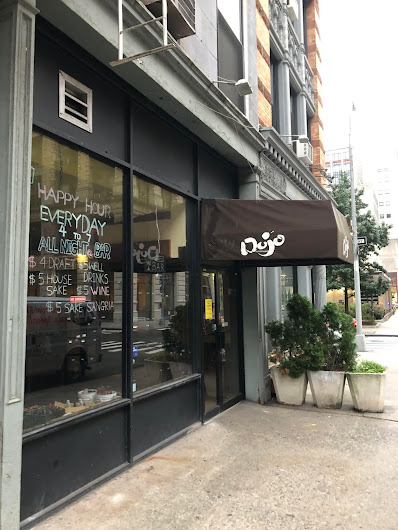 It looks like Dojo has called it quits here on West Fourth Street and Mercer.

As I reported last month, the Department of Health closed the restaurant following an inspection on Sept. 13. (You can read the previous post here.) The inspection turned up 62 violation points, which appeared to be correctable items before any follow-up visit.

However, Dojo has sat empty with the yellow DOH sticked affixed to the front door these past four weeks.

Now, workers have removed everything that wasn't bolted down in the dining room... 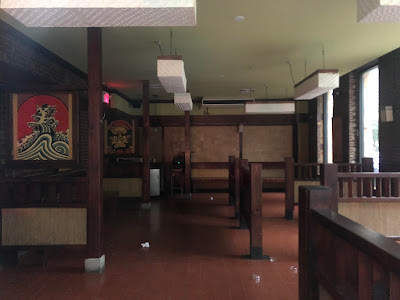 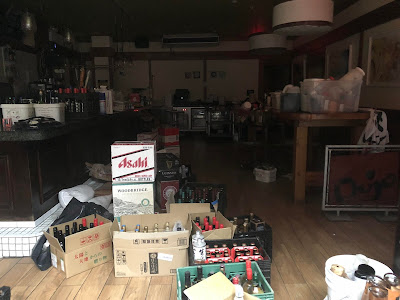 Yelp and Google both list the restaurant as closed.

Attempts to reach anyone at Dojo (via email, Facebook Messenger and the phone) were unsuccessful.

Perhaps there is some renovation afoot. There were rumors in 2013 that this place had closed, though there were renovation signs for customers then.

Dojo began in the East Village... first with the Ice Cream Connection on St. Mark's Place between Second Avenue and Third Avenue in March 1970. Tony Yoshida's Japanese-inspired vegetarian cuisine came along in 1974. And via the Dojo website:

Previously on EV Grieve:
Concern for Dojo, which has now been closed for 2 weeks
Posted by Grieve at 4:19 AM

This makes me really sad. I've been going there for the soy burger since I was in my teens, and I am well past that now. It was $2.95 forever, and still a great deal when the price finally increased.

This is sad indeed. I was planning a visit since I haven’t seen Tadao in years. I remember the Ice Cream Connection well, and the goat milk and honey ice cream. Dojo introduced me to carrot ginger dressing. I’m sorry he’s gone. He was first.

i used to go eat at dojo east back in the mid 70s and the mid 80s....this spells the end of an era which sux thanx to donald chump and nyu and gentrification.....

I’m still betting (and hoping) that it’s a renovation, otherwise they need to post the recipe for their soy burger dinner and carrot dressing before it’s lost forever, As someone else said, it was $2.95 forever, and we used to marvel at how consistent both their food and prices were. We are like that polar bear in the climate change commercials — the world is disappearing all around us.

I think it was the first place where I ate brown rice, and yes, the carrot dressing was memorable. Sad.

Well, I miss the hijiki-tofu patty, which is what I got most often when they were on St. Mark's. The carrot vinaigrette dressing probably isn't hard to duplicate—oh, look! A recipe!

And at the original ice cream stand—I seem to remember a stand on St. Mark's called "Lickety Split" back in 1980, but it may have been a competitor—they had "Panama Red" and "Acapulco Gold" ice cream, or so I've been told. I never sampled it myself, alas.