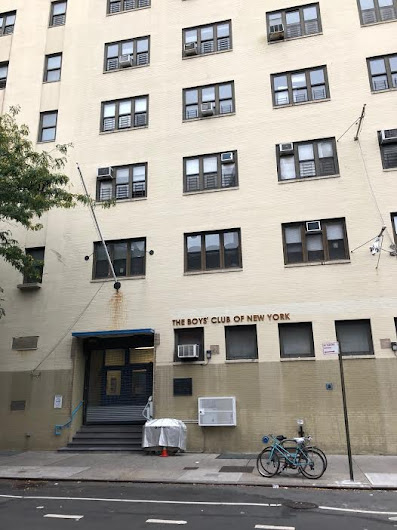 Officials at the Boys' Club of New York (BCNY) are expediting the sales process of the Harriman Clubhouse on 10th Street and Avenue A.

A listing for the 7-story building arrived on the Cushman & Wakefield website earlier this month, with a $32 million asking price.

The building is being pitched as either "an ideal conversion opportunity or continued educational/recreational use by an end user." The accompanying materials highlight the recent luxury condo developments that have cropped up nearby, including Steiner East Village and Ben Shaoul's 100 Avenue A.

Local elected officials — including Manhattan Borough President Gale Brewer, State Sen. Brad Hoylman, Assemblymember Harvey Epstein, and City Councilmember Carlina Rivera — have urged the BCNY board to postpone the sale until they consult with the community in "good faith." However, the BCNY has declined to meet with the elected leaders, and continue with plans to vacate the building in June 2019.

Executive Director Stephen Tosh has said the BCNY will look to rent space elsewhere on the Lower East Side to continue with programming for Harriman members after the closure next summer. He also stated that the sale of the East Village building would allow BCNY the opportunity to start new programs in a neighborhood such as Brownsville or East New York.

Community activists and parents have said that a compelling need remains in this neighborhood for the kind of activities that the Boys' Club offers.

[Updated] Exclusive: The Boys' Club of New York puts the Harriman Clubhouse on the sales market for $32 million
Posted by Grieve at 4:30 AM

Who needs the Boys Club anymore when we will soon have The Moxy?

The Sale of the BClub is about greed and the failure of government(read that as our local pols). Robot Rivera is programed to do as the ONE PARTY RULE leaders want her to do. And that is: don't rock the boat. She cast the most damaging vote in the history of the EV when she voted to rezone the tech hub area. So why should we be surprised that she would barely lift a finger to stop the BClub sale. She isn't programed to stand up for the residents of the EV. She isn't programed to protect the residents of the EV. She isn't programed to help educate, nor protect the health or safety of the residents of the EV. She's been programed to do the bidding of ONE PARTY RULE... no matter how badly it affects the residents of her district. Robot Rivera could go to the city council and ask it to condemn the sale. She could go national and ask the president of the BClub to look into the New York sale. She could ask city regulators to investigate to see if the sale is legal... maybe the land under the BCub is deeded in some sort of covenant. Maybe she could ask the state to investigate. And God-forbid maybe she could ask Mayor Bill to.. But we know she's not programed to do that either. What I don't understand is that she is the product of a race election. This is a Latin district. How could she turn her back on her own people. Most of the boys attending the BClub programs are of color, why ? I mean how, heartless is it that you can betray your own people... knowing that these kids are at risk? That you are denying them the joy, the education the community, the fraternity of growing up to be better men... But sad to say that she is not programed for that. ONE PARTY RULE. ONE PARTY RULE

Fortunately for Caroline Rivera her constituents tend to avoid the voting booths so her silence hence complacency with the sale of this neighborhood institution will not be a bump on her political career.

Cmartyy, you make valid points but it's not the one party rule problem as it is the whole system in which we elect our city officials which is messed up. The amount of money need to make yourself a viable candidate is outrageous so too often private interest invest in a campaign and reap the windfall once their puppet gets in office. De Blasio a so called Liberal/Progressive is still milking the pre-k thing and the Rivera's reasoning for voting in favor of gifting the developer of the Tech Hub that zoning variance and therefore giving away our zoning protection going forward was a similar excuse about helping the children of the neighborhood.

NYSOAG and or a court have to sign off on this with lots of paperwork and opportunity to oppose/contest. So let's hear how are State electeds are going to work that front if they are serious.

Where are all the billionaires of NYC, when you need just ONE of them to step up to the plate & keep the club going for what (to a billionaire) is pocket change? Bloomberg? Jamie Dimon? or even Jeff Bezos?

Why are the super-rich so brain-dead?

Remember how Carl Fischer blithely sold off their building on Astor Place for condos, thinking it would be a piece of cake to find an alternate property? When you have a huge parcel for home base, somehow you think it's not going to be so difficult to get a new home—not realizing that divesting of your main asset is going to destabilize you.

I hope things go well for the Boys' Club, but they're rushing into this suspiciously fast, don't you think?

@Scuba Diva: I agree that this hurried deal smells to high heaven. We will only likely find out the gory details AFTER it's too late to do anything, though.

This is disgusting greed + grubby incompetence at its finest.

Is right, this looks like the Boys Club is hoping to slip the sale under the radar of the city, state and whomever regulates the sale of properties owned by charities especially one which may receive government funding.