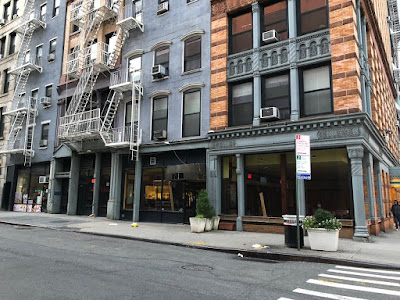 That's it for Dojo on West Fourth Street at Mercer... it was pretty much a foregone conclusion that the restaurant was not going to reopen after sitting vacant following a Sept. 13 DOH inspection that closed its doors. (You can read the previous post here.)

The inspection turned up 62 violation points, which appeared to be correctable items before any follow-up visit.

In any event, the contents of Dojo have been removed ... and the signage has come down.

And a little cut-and-paste Dojo history:

Dojo began in the East Village, first with the Ice Cream Connection on St. Mark's Place between Second Avenue and Third Avenue in March 1970. Tony Yoshida's Japanese-inspired vegetarian cuisine came along in 1974. And via the Dojo website:

I posted the news on Twitter yesterday. Seems as if a lot of people have Dojo memories.

Wow. I have been eating here for nearly 30 years. (Always the soy burger with that amazing carrot ginger dressing) Went here the night of our jr prom rather than do whatever kids usually do. And when I was most poor, it was so affordable. https://t.co/9VCCtv4aLm


Sending thoughts and prayers to all my NYU History peeps. https://t.co/xQSybpplit


RIP the one place in NY that catered to both my brokeness and my vegan-ness at age 17 in the summer of 2002. https://t.co/tTR3Ymde5Y


Today in my-city-is-gone, the closure of a signature Gen-X first-date emporium. As @mehpatrol put it, "Pour out some carrot-ginger dressing." https://t.co/NRbWeOzyJJ

...and even if you frequented the place...

the number of mediocre meals i had here with TISCH friends right after moving to NY. incalculable. https://t.co/VqwLTaBBfS


Carrot ginger dressing on every fucking thing on the menu. RIP. Also, it was gross. https://t.co/DrGyJuV9W4

Previously on EV Grieve:
Dojo looks to have closed for good

Concern for Dojo, which has now been closed for 2 weeks
Posted by Grieve at 6:00 AM

Many nights in my 20s running downstairs to get some food while visiting a friend's apt in 250 mercer. feels like a lifetime ago but it's only been 20 years. never thought the food was that great but legendary nyc restaurants aren't just about the food, they're the space, the people that came together within and the feel of the place.

Dojo’s was an incredible place and one of the most New York spots of all time. I always had a great meal (hundreds of them), never got food poisoning, and if you couldn’t find something you liked on their menu then you just weren’t trying hard enough. The carrot ginger dressing was amazing. I have tried making it many times and its never quite the same. The soy burger dinner was $2,95 forever, Kids used to pour in after going to CBGBs or the movies on weekend nights. There was no better place to take in St Marks Place than from a table by the railing outside, the whole world would pass by, and as soon as someone saw a good table open up they would rush in to take it,

The food and drinks were cheap, they never rushed you to leave, and you could sit there for hours reading a book or the Village Voice and no one would bother you. I alwys felt sorry for the waitstaff because the bill was so low that many people would leave small tips (I often saw people leave tips of 50 cents or less) so I always gave them a huge tip (around 50%) and they always were happy for the extra bit of money. They must have had the poorest waiters in the city, but they always worked hard and the service was fast and efficient. I’ll miss Dojo’s like I’ve missed no other place that’s closed down so far. Thanks Dojio’s, and come back soon. St Marks Place needs you.

Giovanni, have you tried the Moosewood Cookbook carrot-ginger dressing recipe? It's very good but I can't compare it to Dojo's because I was not a regular (though I did work as a waiter at the EV location for about a week). For my late-night people watching back in the day we used to favor Veselka, through whose doors every East Village character who ever lived once passed.

I had a really bad date here in 2012 during the hot summer. This guy could not stop talking about his ex. It was so annoying. He was a total idiot I unfortunately met on Ok Cupid. The only good thing about it was the delicious food, air conditioning, and nice staff. I just kept staring into the window and looking down at my plate of sesame noodles and drinking green tea. Too bad this place is the latest victim in the gentrification of our beloved downtown Manhattan. RIP Dojo....

As Charlie Brown once said: "Maybe the moon will fall out of the sky."

@Rob D. Thanks for the recipe. At least it gives me an excuse to buy shallots which I rarely do,

@Sophocles. My very late nights were also spent at Veselka, usually at the counter, or at a table in the lobby back room. They had one of the best grill chefs in the city who was Ukrainian, and who made the most amazing diner food in the city, but he returned to his country never to be seen again.

@Scuba Diva. As everyone who has studied the subject knows, the moon will not fall from the sky, because its a spaceship designed to save man from his own destruction. One day, a couple of kids will dig up Neil Armstrong’s secret diary and discover the truth: millions of years ago the moon was outfitted by ancient men with engines that will allow it to maneuver. One day, as man is about to destroy the planet, it will fly to the earth, suck up massive amounts if water from the Pacific Ocean along with fish and plant life, absorbing oxygen from our atmosphere. Then ithe moon will return to its normal orbit as a blue planet, becoming a habitable world for a selected few. Or so I’ve heard.

1990’s couldn’t have happened without the lower East side.