Kingsley remains dark on Avenue B 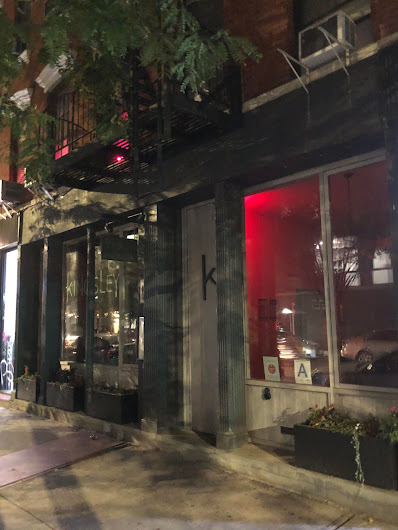 Kingsley, the restaurant from chef Roxanne Spruance at 190 Avenue B, has not been open in the past month here between 11th Street and 12th Street.

The closure has drawn the attention of several residents who live nearby, with one noting inactivity inside dating to the middle of September. (One EVG reader has seen several potential diners peering inside the darkened space on recent weekends in search of brunch.)

There's no mention of a closure on the Kingsley website or social-media properties, which haven't been updated since Sept. 7. No one returned an email or Facebook message; an email to Spruance from an address posted on her Facebook page bounced back as undeliverable. Calls to the restaurant refer people to the website; there isn't any way to leave a voice-mail. The restaurant is also no longer taking reservations. 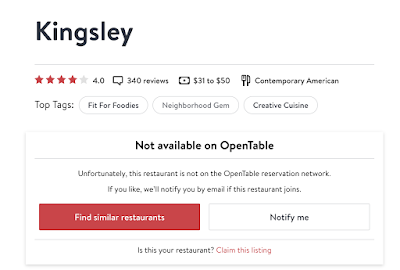 Yelpers are reporting that the restaurant is closed... 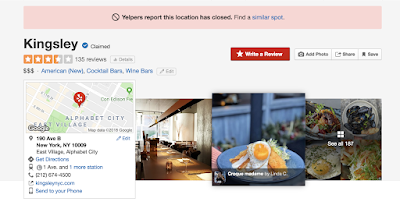 On the topic of Yelp, one would-be diner described her recent dining disaster while Kingsley was shuttered... 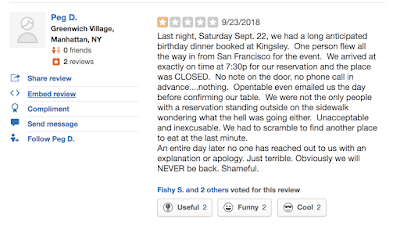 Last night, Saturday Sept. 22, we had a long anticipated birthday dinner booked at Kingsley. One person flew all the way in from San Francisco for the event. We arrived at exactly on time at 7:30 pm for our reservation and the place was CLOSED. No note on the door, no phone call in advance....nothing.

Opentable even emailed us the day before confirming our table. We were not the only people with a reservation standing outside on the sidewalk wondering what the hell was going either. Unacceptable and inexcusable. We had to scramble to find another place to eat at the last minute.

An entire day later no one has reached out to us with an explanation or apology. Just terrible. Obviously we will NEVER be back. Shameful.

Kingsley, serving "seasonal, local ingredients with a contemporary French-American menu," per its website, opened in December 2015, and received plenty of attention given Spruance's past in kitchens such as Blue Hill and WD-50.

The restaurant took took over the space from Back 40, which closed in December 2014 after seven years in business. (Chef-owner Peter Hoffman told Eater that "a difficult landscape and lease uncertainty" led to the closure.)

Said one neighbor and EVG reader: "[Kingsley] seemed to be doing pretty good business... it would be a shame if they’ve closed their doors."
Posted by Grieve at 4:30 AM

Email ThisBlogThis!Share to TwitterShare to FacebookShare to Pinterest
Labels: Kingsley

I'm at the age now that it takes a lot to get my butt into a restaurant like this. I can appreciate good food but can't justify spending the money dining out, I rather spend that money on traveling even for just a weekend away. I wonder if the "foodie lifestyle" is finally waning and people are spending their money on pure bred dogs instead.

I'm sad to hear this. The staff was always super friendly and their bloody mary bar was second-to-none. They'll be missed!

Another one bites the dust. I saw the writing on the wall with this place for quite some time. Sad.

They were very tasty, but too expensive. They also changed their menu which caused us not to go back. Sorry for all involved though.