[Updated] Lumos Kitchen now appears to be closed for good 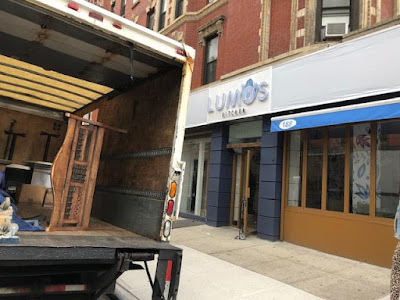 As mentioned last Tuesday, Lumos Kitchen, 188 Second Ave. at 12th Street, hasn't been open in recent months. A sign on the door since early August notes a temporary closure and the words "gas meter."

On Saturday afternoon, EVG reader Harry Weiner spotted workers removing the contents of the restaurant, which is now mostly empty... 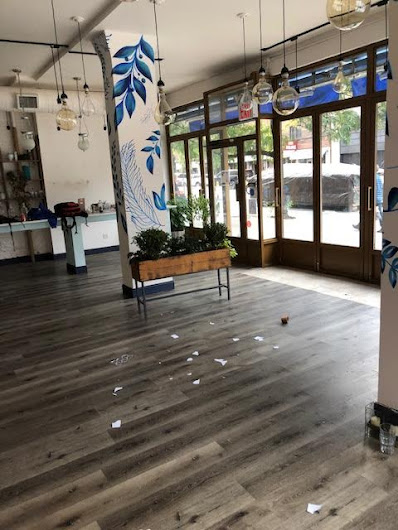 There is a Stop Work Order order for the address dating to late July for "gas work done without a permit" in the kitchen of the restaurant.

To date there isn't any mention of a closure on the Lumos website or social media properties.

The restaurant, serving a menu of French- and Chinese-influenced cuisine, opened in early April. An EVG reader who lives nearby estimates that Lumos has not been open since the end of July.

If this is permanent, then this marks the fourth restaurant — joining Hot Pot Central, DumplingGuo and Dumpling Go — to close here since March 2015.

Previously on EV Grieve:
Lumos Kitchen remains closed
Posted by Grieve at 4:06 AM

Wow, not even four full months in business. These stillborn restaurant opening/closings are a bizarre spectacle, even as they are becoming quite commonplace. Maybe I am naive but I still don't understand What's Happening. Are there really all these wannabe restaurateurs out there who throw in the towel after a couple months? Are these fronts for money laundering? Is it the work of some mysterious benefactor seeking to provide work for contractors? Don't laugh at me, not everyone understands how this wack-ass neighborhood/city operates.

What about the plants ?
They need to be saved !

There’s just not enough business to support these spots because the rents are too high and the number of stable, regular residents is too low. We have more college students and AirBnB travelers than ever before. When the building with the sushi restaurant on 1st Ave had the fire, many of the people who were displaced were AirBnB tourists and NYU students. They don't eat at the local restaurants, they don't even go to Dojo’s anymore. This high turnover economy combined with soaring e-commerce sales and food delivery apps is bad for local business, and the landlords have not adjusted their rents downward to reflect the reality that ther retail space just isn't worth nearly what it used to be. Sears went bankrupt today — what chance does a mom and pop store have in this economy? Kmart on Astor Place will be next to go. At least we still have Moishe’s Bakery, Gem Spa and Veniero’s.

Maybe if they invited Angelika Kitchen to reopen there the curse from that location would be lifted!

It's a shame for ANY restaurant to go out of business due to gas meter or gas line issues.

Having said that, I didn't eat there b/c the prices were out of my range. But a neighbor who *did* have dinner there thought the food was very good.

I also blame the landlords. Any spot that turns over like this: statistics says it can't be every business. The common denominator: the landlord.

What's the point of opening a new restaurant in that spot? History has illustrated since the closer of Shima that this isn't the best block for a eating place. The reason? The space is too large. The rent is too high. And no one can pay its rent unless they are already established with a huge following like Mr. Chang of MooFookoo. I spelled it wrong. Sorry.

You get the idea. This space won't perpetuate success because of the cost and location. I'am sure the greedy landlord will keep it vacant like so many other spaces in the city and call it a day. What a fucking world we live in now.

I liked the food and am sorry to see it go so soon but I thought it was too brightly lit to work as an expensive date/foody restaurant. I don’t think expensive restaurants are inherently doomed to failure in this area. Hearth has made a go of it for awhile. But it is hard to be profitable at any price point if the rent and property taxes are high. These places probably need to consistently sell high-markup drinks with dinner to make money and I don’t know if Lumos managed to do that. How many people pair expensive wine or cocktails with Chinese food?

Could've had a bagel store paying rent on time for the past 3 years if they would've been even the slightest bit reasonable about their ask. Good luck to the next sucker who hands over 34,000 to the greedy clowns who own the building.

The space is so big the landlord should turn it into a mini food court.