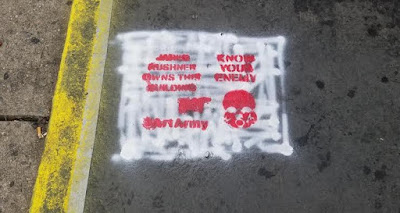 An EVG reader shared this spray-painted marker from outside a building owned by the Kushner Cos. on Avenue A.

The message reads in part: "Jared Kushner owns this building. Know your enemy."

Jared Kushner stepped away from running the family real-estate business when he entered the White House in January 2017 to work for his father-in-law.

Previously on EV Grieve:
Jared Kushner not done buying every walk-up in the East Village

Report: Kushner Co. filed false paperwork with the city over number of rent-regulated tenants
Posted by Grieve at 4:44 PM

Nice, It should be bigger and on a wall on one of his buildings. You should have seen that bastard preening along with the rest of the plutocabinet at the rose garden when Trump told a journalist that she was never thinking. This guy is the enemy and deserves imprisonment but he might wind up with Nikki Haley's job at the U.N.