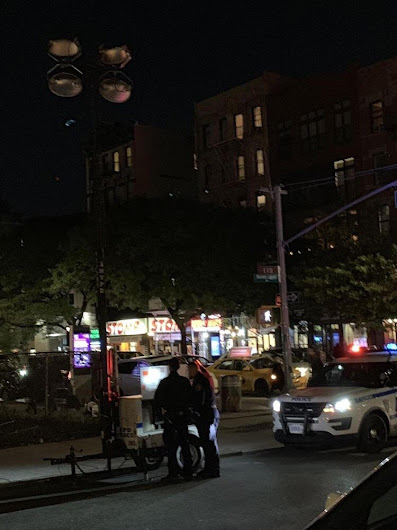 On Sunday night, some kind of malfunction KO'd the police lights that were set up last week on the northwest corner of Second Avenue and Seventh Street... 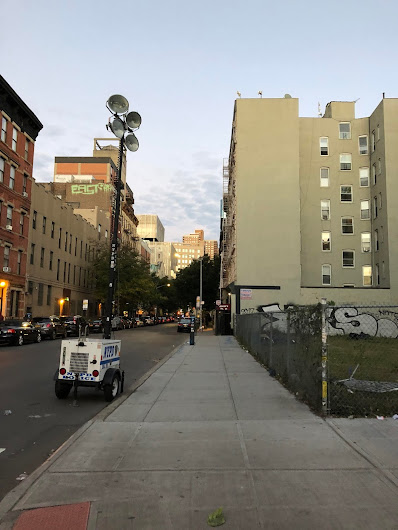 However, after one night off, the lights were back on last night... 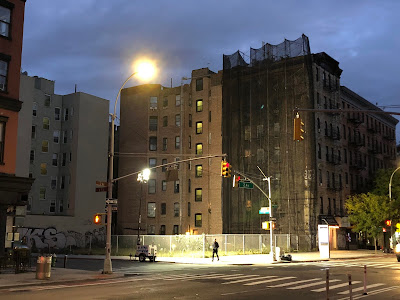 So... I'm guessing the crusties have simply moved around the corner or across the street? God this is dumb.

To be fair, I don't really know what the options are, short of a Democratic takeover of all branches of government resulting in a generous social safety net with a national system of mental health and supportive housing for all who need it. But shining a bright light on this one corner because Rupert's Red Top made someone at City Hall cack themselves seems inadequate, somehow.

God, the crust invasion is the local news version of the Migrant Caravan of Doom canard...

It wasn't a malfunction, Grieve. The nearby LinkNYC locked on and sucked it dry of personal information, including its electricity.

@1:06pm: There will never be a solution to young (or older) people who are NOT mentally ill, but who are, often enough, just bone-lazy and/or school-dropouts and/or who think "hanging out" is a lifestyle.

Crusties should be enrolled in a Marine-style boot camp - some of these babies need a serious wake-up call, and it's clear Mom & Dad are not going to provide it.

Love the extra light, certainly doesn't hurt, especially now that it is
getting darker so much faster.
This is a good thing, not sure why people are so down on it.

I wonder if those lamps are making those disgusting weeds grow in that lot.

This does look stupid and it shows that the NYPD doesn't want to make an effort to go face to face with those poser dirtbags. This will encourage more criminal behavior.

Is it me, or are more crusties hanging out later into the fall this year? I seem to recall that they rapidly dissipated after Labor Day in the past.

It's finally starting to get cold/near freezing, the crusties are heading south at this point anyway.