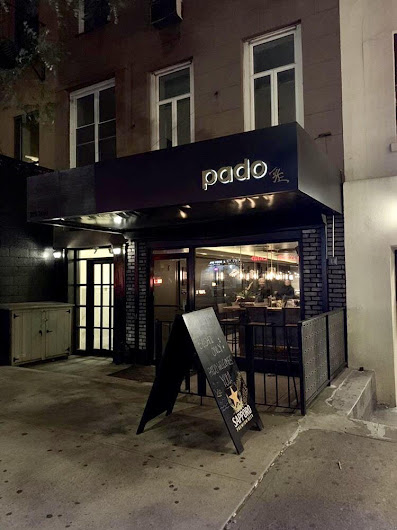 Pado is now in soft-open mode (as of this past Friday) at 199 Second Ave.

The Japanese restaurant's Instagram account notes that they feature "unconventional tapas style plates. We craft every dish with luxury ingredients and attention to detail."

This space between 12th Street and 13th Street was previously Oishi Village Sushi, which closed in late December after nine months in business.

Thanks to Nick Solares for this photo and tip!

Still waiting for this "tapas" trend to pass. I am a hungry guy, I go out to eat I want me an ENTREE. If you have a combo platter, I will probably get that too. But no more "tapas" please. If someone wants some of my food just reach in and grab a bite. So not into passing tiny little "sharing" plates around all evening, screw that.

ps good luck to this new restaurant, welcome to the neighborhood, etc.