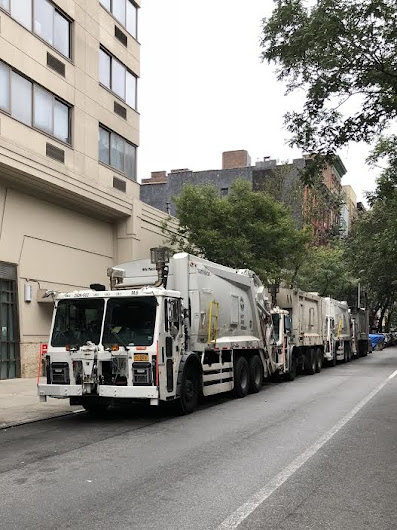 The owners of Pinks, the bar and grill at 242 E. 10th St. west of First Avenue, are hosting a "Trash Bash" tonight as a protest of sorts over the Department of Sanitation's (DSNY) recent decision to park garbage trucks in front of their business.

As I first reported on Sept. 18, the DSNY is now using part of 10th Street for their fleet. The DSNY no longer has use of their garage at 606 W. 30th St., and are relocating their trucks elsewhere, including parts of 10th Street between First Avenue and Second Avenue.

This move — apparently done without much, if any, consultation with Community Board 3 — has sparked numerous complaints from residents and merchants alike who have called out the problems with the smell, noise and negative impact on business.

As for tonight's festivities...

"We are trying an alternative playful community protest to inspire the DSNY to make changes," Pinks owner Avi Burn told me. "We would like those responsible for the decision to make a garbage truck parking lot out of 10th Street to imagine this happening right outside their residence or place of business.

"It's horrific and irresponsible and there are alternatives to be discovered with a little effort. There is always a solution. We understand the DSNY has missed some deadlines to communicate with CB3, this will not go away — they need to focus on it and come to a satisfactory resolution with us."

Here's what to expect this evening, via the Facebook event page:

Costume theme: TRASHY AND FLASHY.
Free entry for costumed guests. $10 suggested donation for all else.

8 PM: Join us for trash themed cocktails and dinner (Mexican Cuisine). Sign a petition against the DSNY's irresponsible actions

9 PM: Trash-ion Show by Christopher Hardwick. Dress in trash pieces or anything related to "Trash." Pinks Gift Card prizes and giveaways to the winners and best dressed! 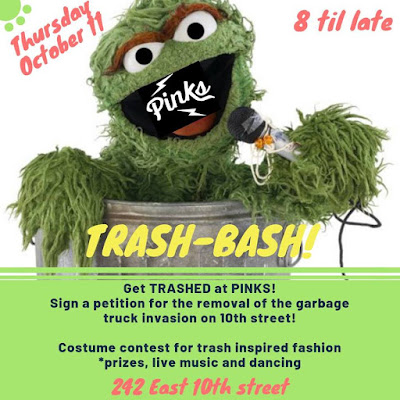 Parking aside, the DSNY hasn't been the best neighbor. On Sept. 27, a surveillance camera captured a DSNY employee dumping trash out of his garbage truck into a planter outside Pinks, ABC 7 reported.

More trash talk about those garbage trucks parked on 10th Street
Posted by Grieve at 4:20 AM

The city knew their lease would be ending -
who was in charge of finding new space ?

how about a good old school sit in, park you butts on the parking spaces used by the Sanitation Dept and make sure to call a reporter from the Daily News or NY Post to make sure it gets front page coverage.

noble neolani seems like they're they're loosing business do you blame them?