Preliminary demolition work at 99-101 E. 2nd St. is — surprise — in the asbestos-removal phase 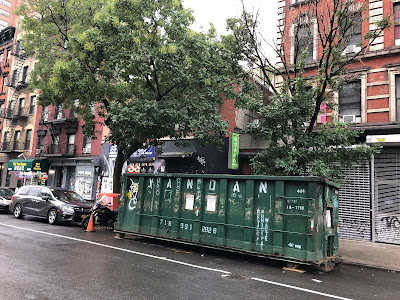 The two-level 99-101 E. Second St. at First Avenue will be demolished in the weeks/months ahead... but not before workers remove the asbestos from the space.

That operation is apparently underway... 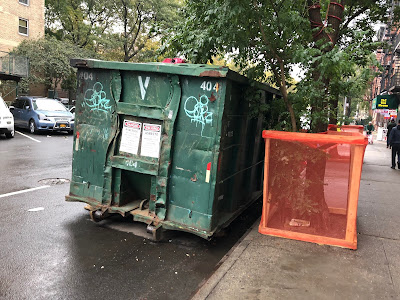 One EVG reader thought this set-up looked a little casual given the potential severity of the work... The reader also noted the lack of notice, which has prompted concerns among a few neighbors who learned of this activity via a sign on the dumpster... 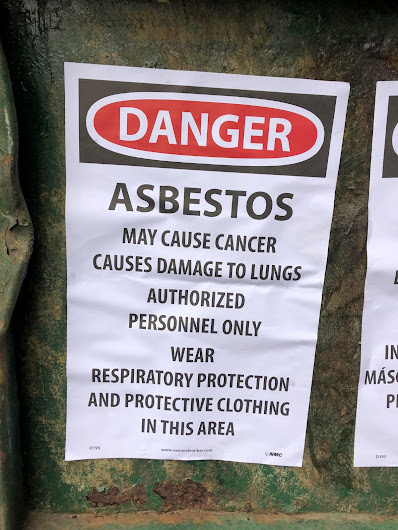 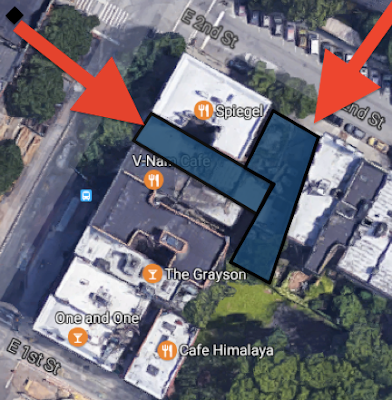 And as a reminder, here's a rendering for the space via the Rybak website... 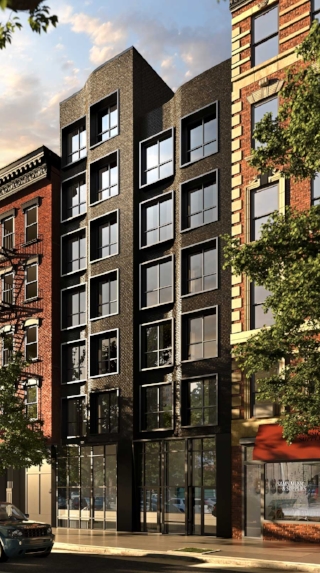 According to the site, the residences will be condos (building name for now — 101E2). The ground-floor space is designated for retail use.

Oh boy here we go again another high priced condo/apartment building for the LES...let me guess 1 bedroom rental apts going for around $4,000 a month or a one bedroom apt for sale for about 1.2 million dollars. Great I am sure all those homeless guys I see camped out on East 2nd Street will really appreciate that place.

You can't put asbestos waste in a dumpster like that. It's illegal. Someone should notify the DEC and DOB.

"Waste transport trailers and dumpsters used to transport removed asbestos containing waste, shall be hard topped, lockable and lined with two (2) layers of six (6) mil fire-retardant polyethylene. Prior to transport from the work site, all waste trailers and dumpsters shall be sealed to ensure air, dust and watertight integrity, utilizing six (6) mil plastic, duct tape and expandable foam sealant as necessary."

"Someone should notify the DEC and DOB."
Why not you?
Do you have knowledge that they are throwing asbestos in the dumpsters? The warning signs might make one suspicious.

If I lived at that building or was a neighbor, I would. Considering I live multiple blocks and an avenue+ away, I don't have a vested interest. Plus I work as an engineer, so if the community board wants to pay me, sure, i'll look into it. No pro-bono work here.

Please note that scaffolding was erected in front of 24 First ave. and 99 East 2nd St. last week, even though there's a "Stop Work" order on this property by the NYC Dept. of Buildings. On Oct. 24th the entire roof of 99 East 2nd St. was removed (my neighbor showed me this from her 6th fl. window that night.) A complaint about work being done without a permit on Oct. 24th was marked as "resolved" by the DOB inspector who claimed that they did an inspection and no work was taking place on that day. Strange because there was jack hammering going on in that property from 7:30am-4pm that day and also scaffolding being acted until 4:30pm. How did the building inspector not notice that?