The gutting of 180 2nd Avenue continues 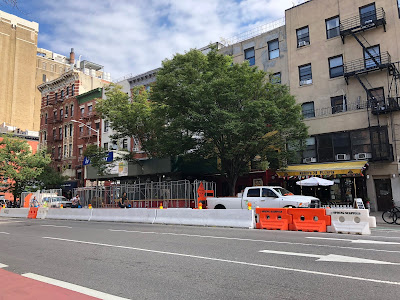 Gut renovations started late last year at 180 Second Ave. between 11th Street and 12th Street, where the existing building is getting a complete condoplexification with the addition of two more floors. 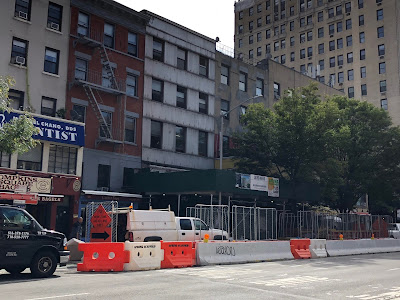 A look inside from the sidewalk reveals the extent of the gut job... and just how much work remains... 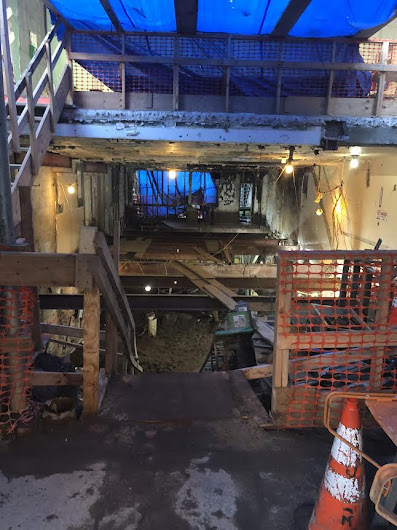 The ongoing work can't be much fun for the restaurants on either side of the property — Cacio e Pepe at No. 182 and Pangea at No. 178. (Go see a show in the backroom at Pangea!) 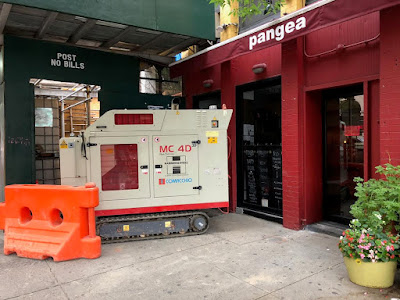 As a reminder from previous post, here's a rendering of the condoplex in making via Ole Sondresen Architect... 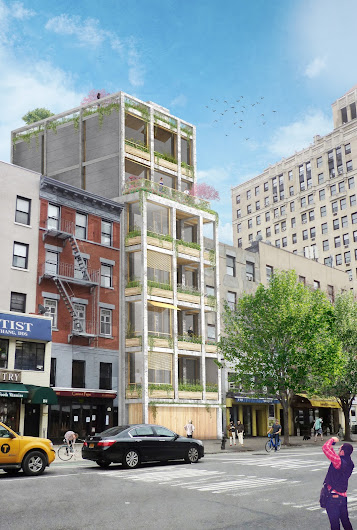 This East Village residential building is elegantly comprised of four 2 bedroom units and two 1 bedroom homes. Each unit features its own private terrace with open views down 2nd Avenue. The apartments are composed of two programmatic wooden boxes housing closets, bathrooms, and mechanicals which allows for an open loft-like feeling in the rest of the living space. The building is designed to earn LEED Platinum and Passive House certification, integrating a green roof with solar hot water panels for each residential unit. Reclaimed wood planters are incorporated into each terrace allowing lush plantings to liven the facade.

The Chicago-based Polish National Alliance was the previous owner of No. 180. The building housed the Józef Pilsudski Institute of America, which is the largest Polish-American research institution specializing in the recent history of Poland and Central Eastern Europe. (They found a new home in Greenpoint.) An LLC bought the building for $6.75 million in June 2014, per public records. The owner is listed as Robert Stern.

As for the ground-floor retail space, the Ninth Ward, the previous tenant, is expected to return.

And a p.s. from this construction zone via Vinny & O ... a Bagel Zone sign greets any salmoners... 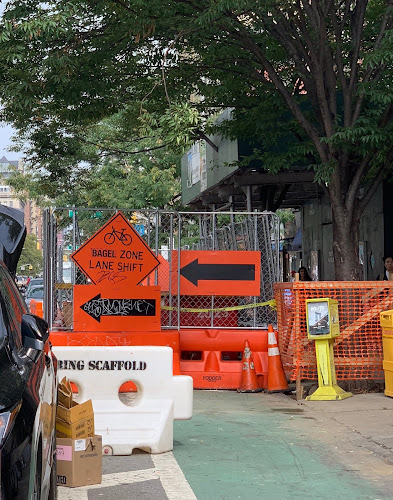 The renderings for the all-new 180 2nd Ave. include Leonardo DiCaprio on a Citi Bike
Posted by Grieve at 4:11 AM

A strong contender for the ugliest new building of 2018.

Oof that does not fit that block at all.... Can't we try to maintain some character?

Have you noticed whether any of these mini-condos that are replacing buildings which all have a front or rear fire escape have a fire escape? As we saw in the Second avenue gas explosion and other fires, an adjacent building fire can easily spread to adjoining buildings. These small buildings can quickly fill with smoke. With only one interior stairwell, how do these people get out alive?

I am curious if all these people opposed to change own cell phones.

Balconies and roof top party space... These condos will turn into mini hotels... Three bedrooms, 3 baths.. and it's party the night away at the expense of the entire block. Noise City welcomes you... Thanks again to out Community Board.

@11:45 AM
so all change is good including badly designed buildings which look like they belong next to the Boston City Hall building? There are always new things being created with beauty this however is not one of those.

That rendering with Leo Dicaprio, amiright?

That rendering shows a building that could hardly be more out-of-context if they tried.

As to buying a condo there, who the hell wants to pay top dollar to live above a bar?? Will the buyers be booze-hounds who don't want to go far to get home after drinking, or people with so much hearing loss that they won't care about the noise levels from the bar & its patrons?

PS: The pace of "renovation" here seems glacial; am wondering if they have the $$ they need, or if they've found some issues they perhaps did not expect. Or maybe it just costs a fortune to reinforce the building to hold the party roof?

No one is going to live in all these condo buildings that are being built. These condos are glorified swiss bank account lockboxes.

Did anyone here see the video your mayor blow off a homeless activist as he was pretending to do yoga? Because I think this video confirms where he stands when it comes to and who he prefers to be living in this city.

Those arrows appear to be directing cyclists to go the wrong direction! Ha ha. I'm not sure who I am laughing at by the way.