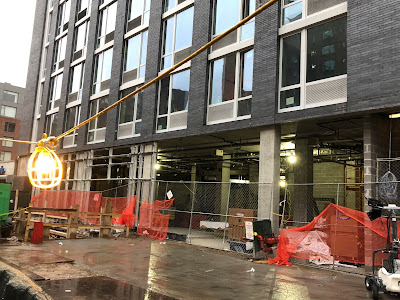 The Trader Joe's opens today down in one of the Essex Crossing buildings on Clinton and Grand.

The company first made this announcement on Oct. 4, 2016.

News of this debut has prompted questions about the TJ's reported/alleged for the new development — EVE! — in the former Peter Stuyvesant Post Office at 432-438 E. 14th St. at Avenue A.

As the above photo shows, that space remains pretty much a shell. (The residential portion of the building is progressing, especially as seen from the 13th Street side. Leasing is expected this fall, per one report.)

In May 2017, The Real Deal, citing anonymous sources, reported that Trader Joe's "quietly signed a lease about two months ago with Mack Real Estate and Benenson Capital Partners ... for 8,531 square on the ground floor and 14,170 square feet on the lower level."

There hasn't been much else mentioned about this location (aside from some TJ clerk gossip that it wasn't happening). However, in a preview of EVE in August, City Realty noted: "To the delight of residents and neighbors, Trader Joe’s is the building’s retail tenant."

Aside from the ground-floor space looking pretty raw, the area outside this storefront will reportedly serve as one of the the main staging areas for repairs during the L-train shutdown. While the L-train service ends for 18 months starting this coming April, the prep work has been ongoing since the summer of 2017.

Anyway, now that I've buried the lead... I asked the Trader Joe's PR office if they are still opening an outpost at this address. Their response: "Unfortunately, we do not have any current plans for a store at that location."

Previously on EV Grieve:
Claim: A Trader Joe's won't be coming to new development at 14th and A after all

Nightmare scenario for residents who learn that 14th Street and Avenue A will be the main staging area for the L-train reconstruction
Posted by Grieve at 5:31 AM

Sounds like there is a little bit of ambivalence from the corporate flacks at Trader Joe's. There might be rumblings in the board room stressing grief speculating how long the Canarsie Tunnel and L train station stops will be done on schedule.

To quote Job Bluth: They made a huge mistake.

can't imagine ANYONE renting space in this building (but what the heck---i'm far from the most intelligent person in any room)......

No company would want that space with the L train mess in front. I almost feel sorry for the developers.. LOL, only kidding.

I donlt feel sorry for these developers, but they sure picked the wrong location for this project, These were the same people who wanted to add 4 more floors to the building after they discovered there is a stream running under the building and that it would cost them more to build. They spent months fighting for a variance to build higher, and got denied, Now that the L Train construction is underway, no retailer with half a brain, including Trader Joe’’s, will go near this place until after the work is finished. Plus this location is just a block or so away from the largest flood zone in lower Manhattan, so the underwater stream may be the least of their problems.

The good news is Associated won’t have to deal with Trader Joe’s on top of the L train mess, which is sure to hurt their business too.

I am disappointed. Trader Joe's is a grocery store, I consider stores like these as essential services. Food after all is very essential to life. We have enough in-essential crap! It's nice to be able to get groceries in your own neighborhood, and existing Trader Joe's stores are literally packed to the literal gills. It's literally like a literal sardine can in there. Yes I know I sound like an idiot.

Grocery stores are essential I agree, but Trader Joe's isn't. There are plenty of grocery stores and supermarkets in the neighbourhood, including various bodegas and the Associated across the street from where Trader Joe's would've opened up. And if you want fresh local produce, you need not look further than the farmer markets in Tompkins Sq Park, Stuy Town and Union Square. With alternatives at both ends of the price scale, Trader Joe's is far from a necessity for buying groceries in the neighborhood.

First the dog parade and now no TJ's my life has be ruined.

No, they won't. And any corporation, including TJ would think long term, get a great bargain on a 10 or 20 years lease now, and will ride out the shutdown.