Reader report: Construction worker laughs at resident who's about to lose his daylight 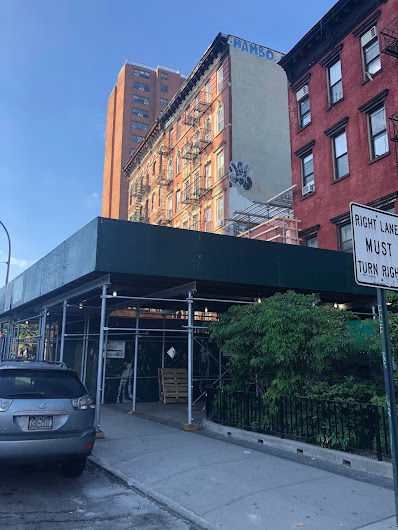 After breaking ground two-and-a-half years ago, work is picking up here at 118 E. First St. between Avenue A and First Avenue.

Crew members — the contractor is listing on the plywood as Wonder Works Construction Corp. — are several floors up now on what will be a 9-floor residential building.

Jan Baracz, a 36-year resident next door, has been monitoring their progress as he's about to lose 70 percent of the natural daylight in his apartment as his views will become an air shaft.

He filmed the workers yesterday after hearing "their screaming of obscenities" and "the fact that many of them do not wear masks." (He has called 311.)

During the video, one worker tells another "you're on candid camera" ... and the one worker says with a laugh at the 36-second point: "Two more weeks and you won't be able to see us anymore!"

While I feel for Jan that the new building will restrict his light, these workers most likely had no influence on the plans to build this new condo. I'd imagine it's a very awkward situation that Jan has put them in by filming them do their job, it appears they are simply trying to laugh off the weirdness of this stranger's camera focused on them

It's all about the air rights and unfortunately for this person, the developer is just doing what they are allowed.

Is this a surprise that they feel this way about us? It like when they are killing animals in the slaughterhouse and laugh at the carcass twitching.

Big deal... it is a horrendous feeling for the tenant and I am not a fan of the development, but if you are filming the workers etc they are gonna bust balls.

is this because of lot line windows?

If anyone is to blame it is the city for allowing this to happen.

That cancerous condoplex development for a few wealthy folks will block the windows in my bedroom, my kitchen and my bathroom. 70% of light in my apartment. Obviously I do not blame the workers but they are the soldiers for the developers. The developers inflicting more damage on our neighborhood are; Bob Marty, Warren Freyer and Cynthia Wu. It is astonishing that they would push for yet another gentrification project in the neighborhood that is already suffering from so much economic and social imbalance. It should be illegal. And today I got serious threats of violence for taking pictures outside the building. I filed a police report to make sure that it is on the record.

These guys come in from the burbs to make a quick buck. They don’t care that they are doing harm. They have no solidarity with fellow working class people.

Jan, I am sorry you are going through losing some value in your apartment. Light can be an important factor in enjoying your apartment. Noise during construction is also a bummer. I am suffering through very loud construction noise where I live the last few weeks. I have moved from an apartment simply because of the noise generated by a neighboring restaurant. I hope you can find a way to cope with the changes or move to another apartment. Nothing is easy in New York. There are bigger forces changing things around us at all times. Focusing on the construction workers is not going to help much of anything, it is the owner of the building next door and the City building regulations that you are fighting a losing battle to.

Jan B: Do you have access to a backyard with some light and sky? Zoning generally requires it in residential districts. Contact my nonprofit at

I am not focusing on workers except that they are in my face, 12 hours a day, without masks. It's easy to speak this kind of nonsense from an anonymous trench of yours. I am not interested in antagonizing the workers. The focus here is on predatory developers, regardless of what the current law allows them to get away with. Air rights that neglect the needs of communities are a real-estate scam and should be outlawed. That cancerous condoplex luxury housing development will deprive us of light in our bedrooms, kitchens and bathrooms. It's a brutally opportunistic design tailored for a small number of wealthy folks (a single apartment per floor) at the price of the further crippling of the already maimed neighborhood. Especially now when the East Village is so economically and socially imbalanced by all the condo cancer that spreads all over the area. Suggestions that I should move out betray where those comments are coming from.

These construction workers are outside and at a safe distance from the building. If you're that concerned about contracting COVID, stop leering at them.

Due to Covid, rents are much lower, rent-regulated apartments are even available because so many people have fled the city at once. This may be your chance to find something better.