Author Q&A: About the dystopian East Village future of 'Drained' 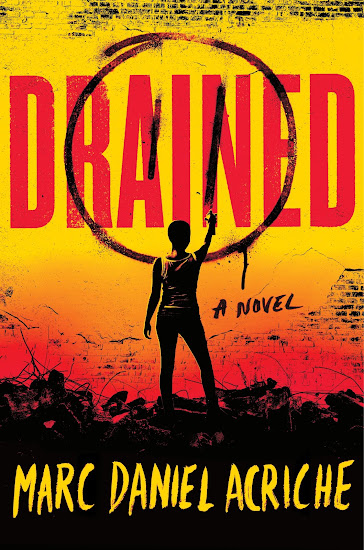 Marc Daniel Acriche, a native New Yorker and longtime East Village resident, recently self-published his first book (this does not include the one he wrote about dinosaurs in the first grade).
"Drained" is a young-adult dystopian thriller taking place in the near future (2048!) NYC. 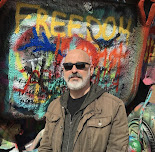 "A good deal of it was inspired by Hurricane Sandy," Acriche told me. "Tompkins Square Park, and the neighborhood generally, are characters in their own right. There's brainwashing, there's spycraft, and, of course, some thrills."
Acriche (aka the EVG commenter who goes by creature) answered a few questions about the book...
Why was this genre appealing to you?
While "Drained" was always meant to be a thriller, taking place in a near-future, dystopian NYC — my first significant read as a kid was Stephen King's "The Stand," so dystopia is in my blood — it was never intended to be a young adult book.
"Drained" started as a three points-of-view story with Casey Parker, our eventual 17-year-old protagonist, being one of the three. Then, after about 20,000 words, Casey started taking over the story — she would not be denied — and I went back and started over with her as the single point-of-view character and the book really took off from there.
The last thing I expected was to write a book with a teen protagonist, but here we are. She took over and we never looked back.
What role does the East Village play in the book?
What role doesn't it play?! As a longtime resident, it was a natural choice for me to place most of the story down here. That said, the story's setting did not fall into place until after Hurricane Sandy. The images from those days stayed with me: the brightly lit food trucks, the communal phone charging and, most of all, how the lights stayed out below 14th Street.
I remember taking a cab home from work a few days after Sandy, passing from the lit streets to the dark, looking out the back window and seeing how 14th Street appeared to be an actual border of light. It was striking. I ended up calling 14th Street the "Light Border" and it came to define so much of the story.
Tompkins Square Park also plays a large role. In the book, it's become a refuge for a good number of the displaced residents from the flooded and condemned streets surrounding it, and, as the park has always been a refuge of sorts, it seemed right having it play that same role in the book.
Talk about the Spotify soundtrack that you created to accompany "Drained." (Ed note: Amyl and the Sniffers!)
I love the soundtrack, I loved putting together the soundtrack, and appreciate you asking about it. First, the Cure aside, most of the songs are from the last few years and were part of my background while writing and editing, but, really, I tried to match up the songs — with the help of my best friend BAGeL Radio's DJ Ted who hosts the list — to the mood of the chapters they represent.
Whether it's the title, the words, or the beat, the songs on the list spoke to me, and, I would hope, the reader as they take the book's journey. That said, on another level, our protagonist is a big music fan, who goes to shows and has band posters on her wall, and it was just natural to have a soundtrack that represented her love for music as well.
-----
Find more book and author info at this link.
Posted by Grieve at 11:30 AM

Casey sounds super sassy! Can't wait to read about her journey and adventures!

Drained is a well polished read that follows the heroine's exploits as she traverse's the gritty landscape of the not so distant future. Cassie is a mix of Dora The Exploerer and Natasha Lyonne (circa 2004)! Will she make it out of the underground? Does she truly want to leave the underground? Love always prevails! Bravo Marc, bravo!

Thank you, EV! This was fun.

Any chance we can get it at Book Club on 3rd St? Trying to buy books there instead of Amazon. Excited to read this.

Also, Book Club can order it for you (if you want to ask in person).

Thank you! I'm going to update my website with the link above.