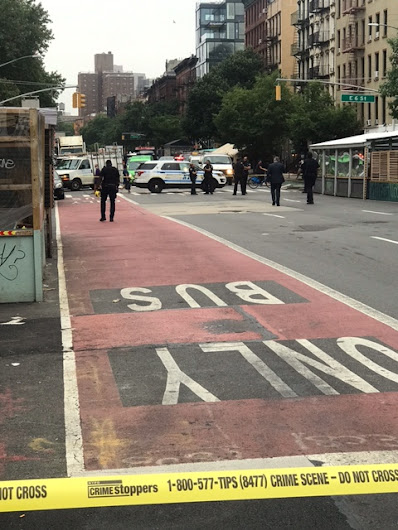 Note: We changed the original headline after the NYPD made more information available.
Multiple EVG readers are reporting that First Avenue is closed to both traffic and pedestrians right now between Sixth Street and Seventh Street. [Update: Traffic is said to be closed from Fourth Street to Ninth Street.]
EVG reader MP shared the top photo and this: "No details other than 'some sort of fight.' No indication if it was inside one of the buildings or on the street."
Detectives were also spotted at the scene closer to Sixth Street. The Citizen app says the report is coming from 396 E. Sixth St. [Update: There isn't such an address...]
Here's another view via Derek Berg... 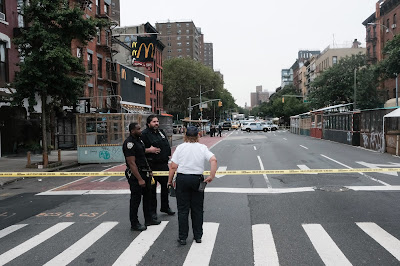 Will update when more information is made available...
Updated 3:15 p.m.
According to amNY, Marvin Bellamy, 37, of Columbus Avenue, was found "face down and wounded on the pavement at the corner of First Avenue and East 6th Street at about 6 a.m."

Bellamy had suffered a puncture wound to his chest, though at this time, police do not know the nature of the injury — or whether he had been attacked.

Updated 6 p.m.
The Daily News reports that Bellamy was stabbed. A News photographer caught a shot of a knife in the outdoor seating area at Elsewhere Espresso.
The police were also seen at Stromboli Pizza on St. Mark's Place and First Avenue, where they believe the suspects may have been prior to the confrontation with the victim.
Updated 8:30 p.m.
CBS 2 has surveillance footage that shows Bellamy chasing two other men before collapsing in front of the McDonald's on the east side of First Avenue between Sixth Street and Seventh Street.
Updated 7/15
The 9th Precinct posted this low-res Wanted ("suspect only") poster on Twitter... 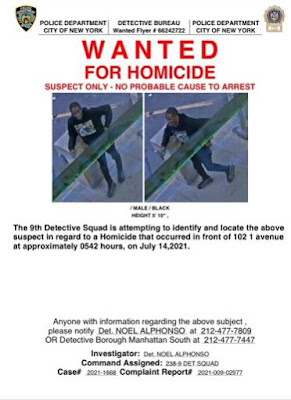 ---
Anyone with information that could help in the investigation is asked to call Crime Stoppers at 1-800-577-TIPS (8477). You may also submit tips online. All calls are strictly confidential.
Posted by Grieve at 8:57 AM

I just spoke with one of the officers at the corner of 1st / 6th. He told me there was an assault that took place but didn't have more information. It appeared that there were police and detectives inside the McDonalds on 1st Avenue. There have been a lot of issues at that McDonalds over the past year and they recently have had a security guard stationed at the entrance during the night.

The cops refused go into detail but said there was a crime there last night and that "it was an isolated incident and not something to be concerned with."

As of 10:15am, traffic is now being diverted at 4th Street and First Ave is closed btwn 4th and 7th Streets. No cars parked on First Ave btwn 6th & 7th, and there's an MTA bus on a NYPD tow truck btwn 5th & 6th - don't know if this has anything to do with it. The 9th Precinct tweeted about some robberies a few hours ago, so maybe they're looking for someone? No FDNY, ambulance or ConEd/Verizon, which indicates nothing wrong with infrastructure. Cops on the street aren't saying anything.

6th and 7th streets also blocked off. That’s a lot for a fight.

Guessing it's the McDonalds, since there is no 396 E 6. Citizen App is handy, but I would not support it. I deleted the app from my phone the second I read this article https://www.vice.com/en/article/y3dpyw/inside-crime-app-citizen-vigilante

The detective is on the phone now at the deli on the NE corner of 7th and 1st. Assault something something.

I was told it was an assault which ended in the murder of a 23-year-old by stabbing, but I can verify nothing.

I also ran into detectives who asked me to cross from the North to the South side of 12 at 1st Ave, so it seems to have extended all the way to that intersection. I didn't see anything amiss aside from some trash spread around the area at the crosswalk.

M15 buses diverted to A too.

This morning at about 7:15 a cop said there was a "small altercation". Closing First Avenue suggests it was a bit more than small.

It's got to be something serious for NYPD to close the whole avenue. There must be more to it than an assault as we see those almost daily and traffic never gets shut down.

I was told the same thing as "Unknown" at 9:54am - that it was an investigation into a crime that occurred last night. I headed down 7th street and saw a residential building on the north side of the street also blocked off with crime scene tape so perhaps that's where the incident occurred? Must have been some "incident" to warrant hours of street closure. A city bus had to be towed because it couldn't make the turn onto 6th st.

The whole area around the building with Elsewhere Espresso on 6th had the blue and white police tape too.

Walked by the outdoor sitting area next to Elsewhere and there were 2 police officers standing next to a sheathed kitchen knife. Perhaps guarding some evidence?

This afternoon at approximately 2:15, there was police tape surrounding Stromboli pizza on 1st Ave and St. Mark’s place. Three NYPD detectives were out front discussing something that appeared to be related to whatever occurred there,

Where’s the anonymous poster with their crime fear mongering comment?

There was ayoung homeless guy sleeping in Elsewhere's shed on a mattress last night. Wonder if its connected since the shed was cordoned off with police tape this afternoon

we need more police presence... crime has sky rocketed and so many desperate junkies desperate for next hit. It is like 1989 again.


Police do nothing but sit in cars on phone...

So weird that I walked out to this for an appointment around 1 p.m. and on my way home around 3 p.m. I passed by cops closing off another whole block with tape, this time where the Barnes + Noble is on Union Square. Must be something in the air today. ..

On CBS news on Channel 2 they showed the security camera video from inside of McDonalds. It showed one man chasing two other men down the block. The man who was chasing the other two was found stabbed on the corner and later died. May he resist in peace and the murderer found quickly,.

Re 3:59 "crime fear mongering comment"
Obviously something serious happened. Not sure why you have problems with people commenting on the increase in crime in the area

You are posting anonymously, too. And how is it fear mongering to note a rise in crime on the day of a murder blocks from our homes?

The violent crime in the area has been INSANE lately. Too many scumbags, drug addicts, homeless, mentally handicapped and AGGRESSIVE AND THREATENING. It’s impossible to live here!

I couldn’t agree more-the area is out of control with junkies, crazy people and homeless who are really not receiving mental health care and hence are really dangerous. The outdoor dining sheds are gross and have become shelters, it’s actually awful and they need to come down now that restaurants are open again. And don’t get me started on lack of police presence-I see cop cars all over, but 0 presence on the street. I don’t feel safe and have lived here my entire life. There’s needs to be less focus on rooftop parties and more on safety and what’s best for the community that actually lives and works here.

I was wondering about the detour the 1st avenue buses were taking last [Wednesday] evening, and the driver was very reticent about why he was taking said detour.

One cannot blame the police for not walking the streets
or 'just' sitting in their cars.
This directive comes from the top ( mayor ).
Crime has spiraled out of control and just
why is the mayor refusing to do anything about it ?

That app is sooooo inaccurate.

I wonder why. Our current “leader” wants less police not more. Let’s get rid of all cops and just have counselors.

Mayor can’t show any outward suport for police it would antagonize his base. He already took $1 billion away from their funding.

I read about this horrible murder. When I checked the 9th Precinct stats, there have been THREE murders so far, the most in several years. I'm wondering what the other 2 murders were this year so far - any info?

The other two murders within the confines of the 9th Precinct:

• Feb. 10, First Avenue and 11th Street
Anthony Fabriani, 60, died following an altercation. He was punched and hit his head on the sidewalk

Thank you! Yes, the one of Ave C I believe was drug related. The one on 11th St. I believe was a random act of violence, which quite honestly are always the most frightening. Let's pray there are no others this year. I also saw that crime in general is way up in our precinct, including rapes and hate crimes! Huge increases per the statistical sheet from the NYPD 9th Precinct.