Who's NOT on tonight's CB3-SLA docket: Roberta's Pizza, Spiegel

CB's SLA committee meets tonight... as of now, five applicants will be appearing before the group.
Meanwhile, several applicants are no longer on tonight's docket... including two of particular interest. One is Spiegel ... multiple tipsters told us at the start of the summer that the cafe is returning to its former home at 26 First Ave. at Second Street ... 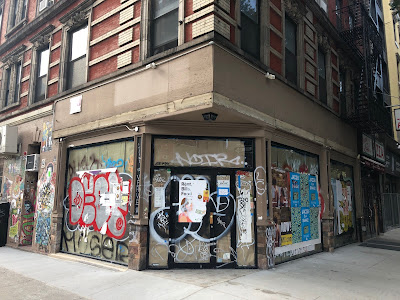 Expect to see them another month as they apply for a new liquor license for the corner space. (They previously had a full liquor license until they closed at some point during the pandemic.)
Also no longer on tonight's agenda — Roberta's Pizza.
As previously reported, 15 Avenue A between Houston and Second Street is undergoing a vertical expansion. 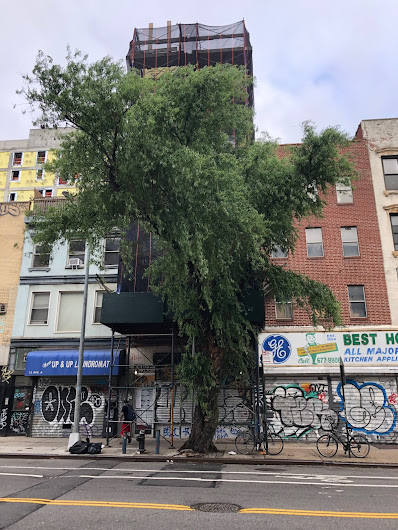 The new retail tenant was expected to be a wine bar from Bushwick-based pizzeria Roberta's.
Chef-owner Carlo Mirarchi told Grub Street in September 2019 that they were going to open what he called Roberta's Wine Bar.
However, nothing more was ever mentioned about the project, and it was unknown if those plans were moving forward. Obviously so with the application for a new liquor license. (The retail space at 15 Avenue A was previously the Family Dental Center, which moved down to Essex Street in 2017.)
Roberta's got its start in Bushwick in 2008. As Eater noted, Roberta's had been on an expansion kick, with openings in several food halls, and adding two locations in Los Angeles and one in Williamsburg ... not to mention its frozen pizza business ... and burger joint.
Posted by Grieve at 5:00 AM

We definitely can do without Roberta's wine bar around here