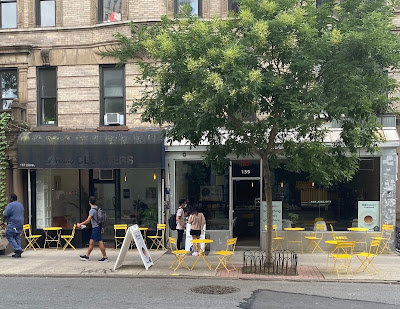 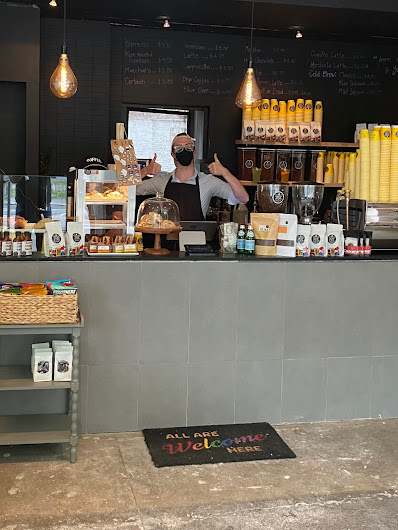 As we first noted on June 2, 787 signed a lease for both storefronts — the one on the left (in the top pic) is serving as an office for the coffee shop
With this opening, 787 has four East Village locations, joining 131 E. Seventh St., 101 Second Ave. and 319. E. 14th St.
The Seventh Street store, which opened in October 2018, was the first for co-owners Brandon Pena and Sam Sepulveda, who wanted to bring Puerto Rican coffee to NYC. Their coffee is grown and roasted from a mountain-top farm in Maricao. (And 787 takes its names from Puerto Rico's area code.)
No. 159 was previously home to Third Rail Coffee, which did not reopen here following the PAUSE of March 2020. Next door, Danny's Cleaners merged their business with Lois Cleaners on the southeast corner of 10th Street and Third Avenue.
Photos by Steven!
Posted by Grieve at 5:01 AM

I've been going to the 14th St location since they opened in the space that was formerly Champion Coffee and Madman Espresso before that. They are great! Good coffee, great Puerto Rican pastries (sweet and savory), nice staff, and at least at that store they give a 10% discount if you live or work in the neighborhood. The space is tiny, though they have tables and chairs on the wide sidewalk - mostly I take my coffee to go for home around the corner or Stuyvesant Square. Nice to see a local chain expand - this can only be good for the neighborhood (I used to live on that block of 10th).