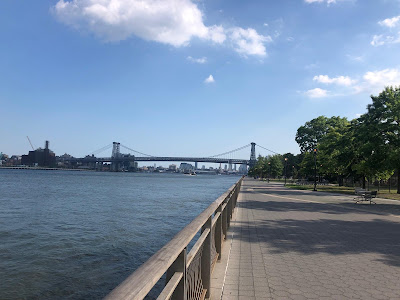 Updated 7/29
As amNY first reported: "After several discussions with the DDC, the comptroller is requesting the agency tackle some unresolved issues, including information disclosure concerns." AND: "Though Stringer kicked the contract back to the DDC, it does not mean that he won’t sign it in the future — or that the project won’t move forward."
---
The low bidder's contract for the East Side Coastal Resiliency Plan (ESCR) at East River Park is waiting for approval at Comptroller Scott Stringer's office.
And opponents of the current plan, led by East River Park Action, are urging Stringer to withhold his approval of the bid by IPC Resiliency Partners. (Read more about the bidding drama here.)
Today at noon, group members will rally outside his office at 1 Centre St.
Here's more via an email from East River Park Action:

Once approved and a Notice to Proceed is issued, IPC can begin prep work for the demolition of East River Park — including cutting down almost 1,000 mature trees — in order to build a giant levee over the 46-acre land. The Department of Design and Construction, which oversees the project, said at prior Community Board 3 meetings that surveyors are ready to enter the park to perform necessary tests. Other work will include fencing of the park and bringing in trailers for field offices, which can begin within two months of approval.
At a time when the city is in a fiscal crisis, we are urging Comptroller Stringer to withhold approval on the $1,272,221,100 construction contract with IPC for the ESCR project that has already gone over-budget, until an independent review is conducted on the prior plan that would've cost the City considerably less money and the park considerably less destruction.

Opponents of the city's current plan — where workers will raze the 57.5-acre plot of land, bulldozing 1,000 mature trees and rebuilding the park atop eight feet of landfill — say there are better ways to preserve the park and provide flood protection, such as the one mapped out in the years after Sandy.
In late 2018, the city surprised community stakeholders by announcing a complete overhaul of a plan discussed over four years of local meetings.
In October 2019, the city announced that they would phase in the construction, so only portions of the park are closed to the public at any given time.
According to various reports, the city has committed to leaving a minimum of 42 percent of East River Park open to the public. It is projected to be completed in 2025, a timetable opponents say will never be met.
Previously on EV Grieve:
• City tries again with the release of a Value Engineering Study for East River Park
• Report: Lowest bids for East River Park construction are $73 million over budget
• Report: Now there's an East River Park construction lawsuit
Posted by Grieve at 5:20 AM

Mark my words. This project will continue to move forward. Just sayin!

I wish they would cancel this stupid plan. Cutting down all those trees and tearing up the park is a disgrace and so unnecessary. A flood barrier water protection wall that is high enough can be simply be built between the north bound FDR drive and the interior FDR park pedestrian walkway. This could be done for a fraction of the cost and time that the current park reconstruction plan calls for.

This plan will kill residency in the EV/LES. With no major park to absorb all the people, there will be a flood into other parks. They've already closed down a large section of the park without their even being a developer bid. Are there no politicians with any gumption/balls to stop this horrendous plan?

Damned if they do and damned if they don't. This is literally being between a rock and a hard place. No matter what course or action or inaction is taken there are going to be a lot of unhappy people.

Im guessing they can cut down every tree in the park by 2025. Finish the work, however, not a chance.

Bring back the old non-park-razing plan.

I'm no geologist/physicist/oceanographer but tell me why there isn't something similar being discussed for the OTHER side of the East River? The sea water isn't going to rise just on the Manhattan side.

Something really stinks about this whole project.

In case no one has noticed, this plan is about mainly protecting the city’s property, I.e., the public housing projects that run all along the park. The buildings in Madison Houses, Wald Houses and Riis Houses’ have all been hardened with generators on their roofs. The city is hoping to keep flood waters out of the projects AND not have to redo the park after the next Sandy hits.

Our public parks are being stolen from us. In the last few months, this atrocity was approved by the Mayor, City Council and our Councilperson. Governors Island is now being developed for real estate, under the guise of building a "Climate Center". The buildings on Hart Island are being demolished under a shady "emergency" order which allows normal protections to be bypassed. And (like it or not) the takeover of restaurants of outdoor space is another private takeover of public space. Our politicians are robbing us blind.

The situation in all the parks is out of control. A lot of guys are zooming around Tompkins on dirt bikes, electric bikes and scooters all day and night. Anyone else notice that? There is no enforcement. There should be signage and enforcement because someone is going to get hurt. Are people doing this over at the East River Park? I haven't gone over there in a couple of years. I got sick of running into creepy guys over there.

If they go through with the current plan, rip out all the trees, dig up the park, etc. there will be no park for close to 20 years. There's no way they'll finish in the stated 5 years. There's no way they are going to leave 42% of the park as "usable"—which part of the park is that? Just the paved areas? Will there be access to the water? The air quality will go way down, thanks to no trees and digging up old landfill. They don't even have a source for the 57 acres of 8' deep landfill they claim they are going to put in. This plan is a boondoggle and stinks to high heaven. The future is NOT CARS, and closing a single lane of the FDR to build a berm wouldn't cost even 1/2 as much as this already over budget project does. What reason does anyone have to stay in the area, if they are a daily park user (as I am)? The health impact is going to be tremendous on those of us with already hinky lungs. KILL THE CONTRACT, SAVE THE PARK.

This is just an excuse to turn the east river drive into a pay for play park just like every other recent development in Manhattan. We have too many free amenities available to the public and that doesn't fly in our capitalist city. Expect more little island/vessel type attractions with paid reservations and time limits to be the norm once they turn the new park into a stone and astro turf attraction.