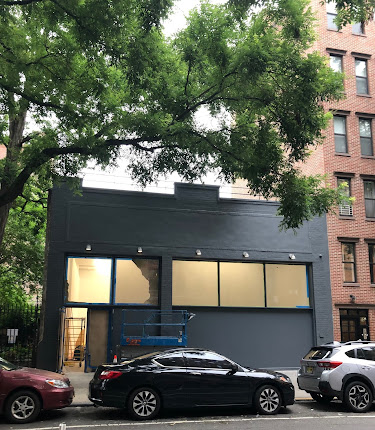 Updated: Karma is now open. Here's info (link) on their debut exhibit. The gallery is open from 10 a.m. to 6 p.m. Monday through Friday.
Renovations continue at the Ideal Glass building at 20-22 E. Second St. between Second Avenue and the Bowery... where, as we reported here and here, Karma Gallery is opening a new space.
Unfortunately, as multiple readers pointed out in recent days, the familiar Ideal Glass signage apparently isn't going to be part of the new exterior.

Unable to resist the easy answer, I think it’s bad karma not to have found a way to incorporate the sign. There are few archaeological remains of the neighborhood’s past. Not all are worth saving, I think this was one that was.

Through the years, artists creating murals on the storefront worked around the Ideal Glass signage ... 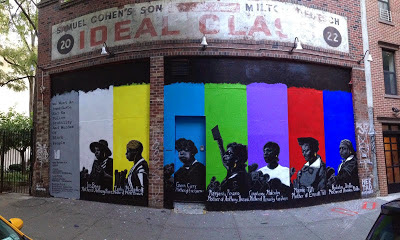 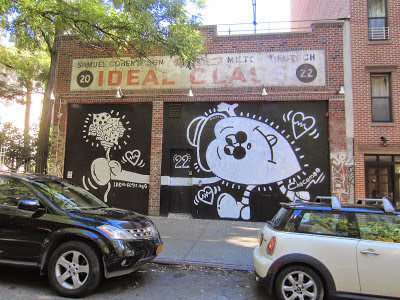 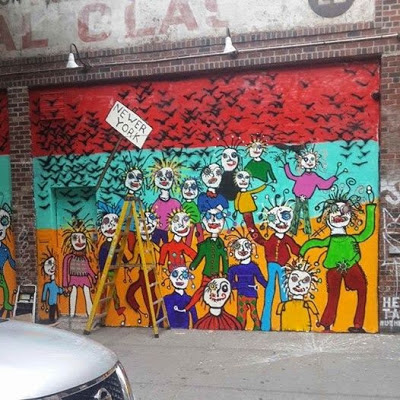 The Ideal Glass building dates to the 1950s, when used as a glazier's workshop... and the remaining sign was from that era...

Willard Morgan started the Ideal Glass Studios, an artist-run film & TV production studio, in 2004 ... and the Second Street building was in use as a gallery and art collective. Morgan, who still owns the building, runs Ideal Glass Studios from space on West Eighth Street.  (We reached out to Morgan to see if, perhaps, the sign had been preserved.)
As for the new tenant, this is the latest EV expansion for art dealer and publisher Brendan Dugan, who debuted Karma on Second Street between Avenue A and Avenue B in November 2016. (Karma Books opened in April 2018 at 136 E. Third St. between Avenue A and First Avenue.)
According to artnet News, who first reported on this deal, this "latest venue is set to be the crown jewel" for Karma. Why? "The ceiling height alone is enough to make a dealer salivate, and there will no doubt be a number of artists maneuvering for spots on the programming schedule."
Posted by Grieve at 5:05 AM

is it just me or have architects gotten lazy with the overkill of painting brick buildings dark gray?

Art serves the ruling elite, not the neighborhood.

art serves everyone! make your own!

Bad decision. Stripping street life of interest so your well-heeled patrons can enjoy a more uniform and less challenging aesthetic experience on the way to their commodities speculation, I mean gallery viewings, says it all.

I'm surprised at how distressed I am. I overheard the preppy owner dude outside the building saying to two women,“I’m like, ‘What are you TALKING about; it was a sign from a business like 50 years ago!’”

Flames, flames on the side of my face.

(It was way older than 50, dude, and have some respect. Some business owners in our nabe have preserved their building's old signage and incorporated it into their own; that would certainly be a way to go rather than creating a Starbucks Elite pallid dark gray box. OOH, EDGY.

Bummer - I love that old sign. Been to a few events there over the years and it's a great space inside.

Wow. What a mistake.

Marjorie, I was talking with the same guy. Works for the architect. He laid that lame excuse on me too. Am still amazed that these businesses clamor to be in a (formerly) interesting neighborhood yet turn their businesses and buildings into the most milquetoast, unoriginal and bland spaces imaginable. That space could be anywhere now, so oblivious to the community and anything but herd mentality taste they wiped out all that was unique. The building front is a smooth gray expanse with no plans for murals or any kind of artwork on it like the previous tenant. They have already had to paint over the graffiti tags. Graffiti bomb away kids!

Oh that's wack wtf, maybe they replace it after the facade work is done.

The sign couldn't have been removed because it was painted directly on the masonry. So it couldn't be preserved and it can't be replaced. It was painted over, very intentionally, very carefully and no doubt at great expense.

I stopped in this week and inquired with the person sitting in reception as to whether the sign would be put back up. She stated that it would not be coming back.

I asked her to pass along feedback, from a neighbor, to whomever was in charge of that decision.

I hope more people will consider stopping in to provide their feedback and thoughts if they are feeling something about this.