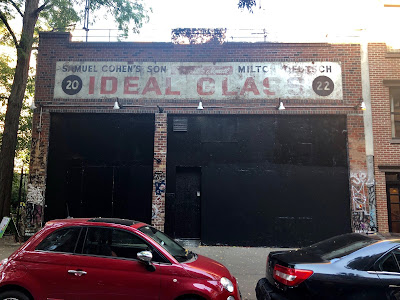 Karma gallery is taking over the Ideal Glass space at 20-22 E. Second St. between Second Avenue and the Bowery.
This will be the latest EV expansion for art dealer and publisher Brendan Dugan, who debuted Karma on Second Street between Avenue A and Avenue B in November 2016.
Karma Books opened in April 2018 at 136 E. Third St. between Avenue A and First Avenue ... in the former home of St. Mark's Bookshop. And more recently, Karma opened a small storefront gallery on the same Second Street block as its first EV gallery.
As for Ideal Glass, that space had been on the rental market going back to January... 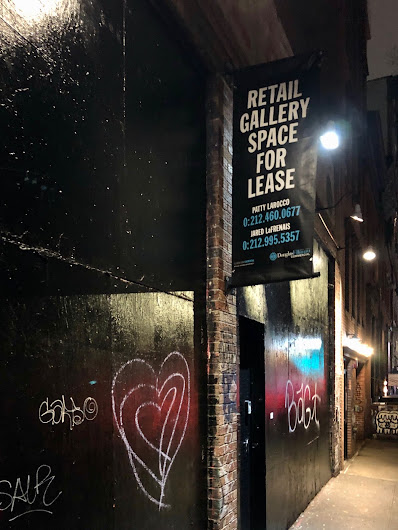 According to artnet News, who first reported on this deal, this "latest venue is set to be the crown jewel" for Karma. Why? "The ceiling height alone is enough to make a dealer salivate, and there will no doubt be a number of artists maneuvering for spots on the programming schedule."
Since 2004, performer Willard Morgan had been using Ideal Glass as an events and performance space. He still owns the building and had been looking for a like-minded tenant. Ideal Glass carries on with film and TV production studios in two other NYC locations.
The Ideal Glass building dates to the 1950s when it was in use as a glazier's workshop.
Posted by Grieve at 5:10 AM

From the very start Karma Gallery has been a great addition to the EV hood, and it’s fantastic they can flourish and expand, much better than another bro/woohoo girl bar

I hope they keep that ancient sign. It would be criminal to lose it.

Great news! It's nice to see a number of galleries in the neighborhood seeming to flourish and being good neighbors.

Very cool! Hopefully bright side of retail decline will be more art & creativity in the hood again