Illustrations from the pandemic 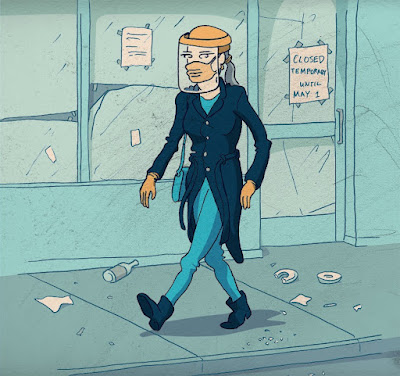 Throughout the pandemic-fueled PAUSE in NYC, East Village-based visual designer and illustrator Robin Muccari documented his experiences while taking walks at night and during breaks from working in his small apartment.
He shared those illustrations and observances in a recent post on Medium.
What follows is a small selection of his work... visit the site for more... (with a thank you to Loren DeVito) ... 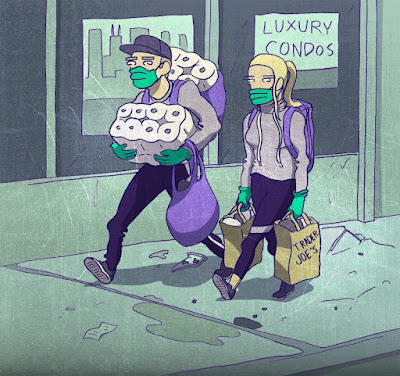 Then the hoarding crisis quickly came into play. People left Trader Joe’s and Target on 14th Street and Avenue A with many bags of toilet paper, sanitizer, bread, and more.
----- 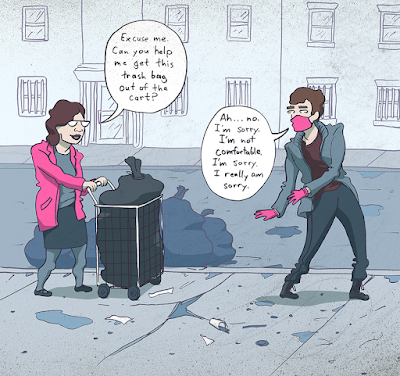 Those who took it seriously, though, kept at least a six-foot distance and some were uncomfortable helping others.
----- 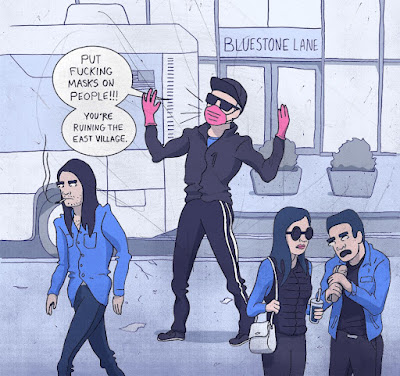 But despite the panic, there were still people who thought they either didn’t need a mask or didn’t wear it at all times. They were oblivious to others who coughed or sneezed near them. This happened enough that people screamed at them in the neighborhood.
Posted by Grieve at 4:29 AM

these are wonderful. i encourage you to check out, on Instagram @quarantinediaryproject which was done in the early days of the pandemic lockdown in NYC

The lack of masks is infuriating, especially during the worst of it. I was in the 7-11 on 14th and a woman refused to put her mask on, started screaming at the employee how she knew the owner and was going to get the guy fired for not letting her in. I'm generally a passive person, never been in a fight, but I yelled at her from across the store. Poor employee was shook.

These are great, nice work. I could see this being turned into an animated cartoon series

I’m back to wearing N95 masks now that the Delta variant is taking over. My cousin’s daughter just tested positive yesterday, not hospitalized but feeling very sick. Now she has to isolate for 10 days. She works with young children as a teacher so of course none of them are vaccinated yet. I’m not sure how how the schools are expected to fully reopen until kids are vaccinated too.