Thanks for the memories: Mars Bar closed 10 years ago today 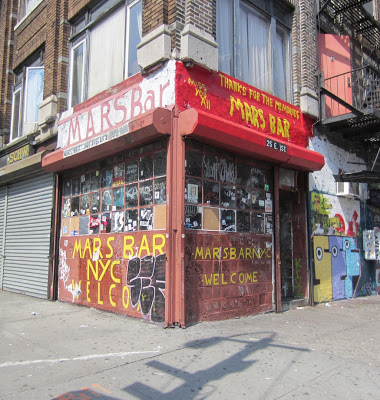 True story: Mars Bar closed for good 10 years ago today on Second Avenue at First Street.
It's one of those kinda-seems-like-yesterday moments. I recall Goggla emailing me with the news... 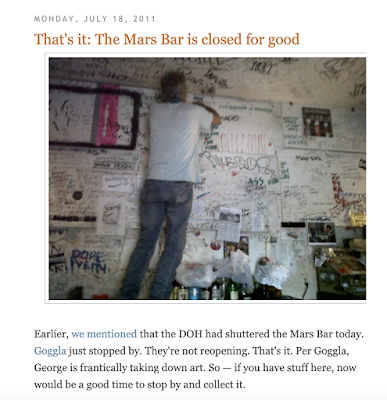 The place was closing anyway to make way for the 12-story apartment building on the lot... But people thought that they had the rest of the summer of 2011 to enjoy the bar... or at least go to it.
However, a DOH visit did them in on July 18, 2011 — 54 violation points and mentions of every known type of fly. (Filth flies! Flesh flies!) And apparently, owner Hank Penza said the hell with it. And closed.
For a time, the place was the greatest, strangest, dirtiest bar around the neighborhood.
Here's what the Times had to say about Mars Bar once ...

[I]n its prime it was perhaps the epitome of an East Village bar: menacing, dark and covered inside and out by graffiti, stickers and impromptu spray-painted artworks. Its forbidding restroom was an urban legend in and of itself.

It wasn't always that way ... per a different feature at the Times:

When the bar opened in 1984 ... the facade was gleaming. "We thought, 'Oh no, another sushi bar; there goes the neighborhood,'" said Jim Sizelove, who was part of the rowdy art scene called the Rivington School.

We can relive the bar here for a moment... in 2016, East Village-based filmmaker Jenny Woodward released an entertaining video short titled "Last Days of the Mars Bar," featuring interviews with Penza in the days leading up to the bar's closure.

Penza shares some colorful anecdotes (and perhaps tall tales), such as how the bar got its name and how the first art appeared on the bar's walls.

And Penza doesn't seem all that broken up about the end of days here.

Here's a rather serene slice-of-Mars-Bar life showing a few people quietly sitting while David Bowie's "China Girl" plays on the jukebox. (Thanks Alex!) The video isn't dated ... it was uploaded in April 2012. It's aptly titled in part "Sweet Memories."
And don't forget "My Mars Bar Movie," the 87-minute documentary directed by the late Jonas Mekas of the nearby Anthology Film Archives.

The corner storefronts where Mars Bar stood were eventually demolished in late 2011/early 2012 to make way for the residential building called Jupiter 21. The corner space now houses a TD Bank and Kollectiv, "an urban retreat center" that features an herbal pharmacy and spa. 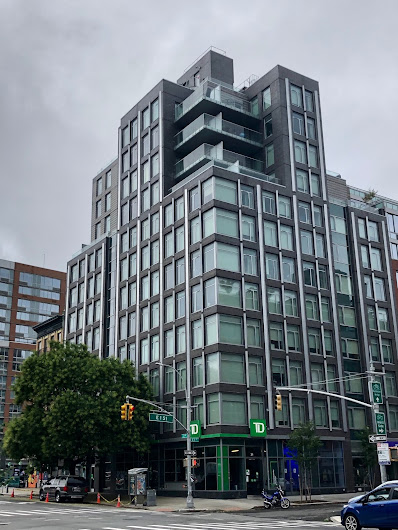 Anyway, thanks for the memories... 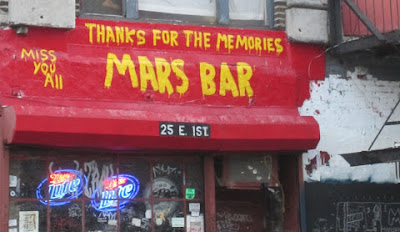 Can anyone share photos of the bathroom? I'm curious!

Ah the good old days of gritty New York City before it was taken over by real estate developers, corporations and banks. Thanks for the article it was a good piece of nostalgia.

With the way things are going, gritty NYC may make a comeback…

Sadly you may be right!! But it’s not going to be like it was back in the 80’s!! Rents are still too high, the majority of the people coming in are only short timers. It may end up being even worse!!🤷‍♂️

the halcyon days of the EV

MARS had been my corner bar for over 20yrs. All though I've been searching, I've yet to find
anything that comes near the eclectic mix, the over-all camaraderie, the shear daily examples
of life's spectrum that existed and played out in those tight confines. (BTW: I have the tagged
Rubber Machine) :-)

My bar, meaning the one I spent time and money in drinking or partying was conveniently across the street from my apartment on the corner of A & 11th. Brownies sure had a life. Many of us that hung there were in our 30s, which is a great age no matter how horrible it may be. The owner of Brownies took me to The Village Idiot a couple of times. I am reminded of that place by the photos of Mars here.

Yes the good old days when the East Village was still a neighborhood with its artists, writers and cast of characters that made it so unique. Unlike what it's become - a party place (hey, let's go down to the East Village and get wasted) for vodka-shot swilling bros and girls dressed in slips tittering around in sky-high heels. So sad.

Thank you for the footage of Hank - made me smile. I really miss the freedom of Mars, and that vibe of the neighborhood. I don't think we'll have anything like that here again for a long time to come.

One was hilariously used in an airline travel magazine, which had mistaken Mars Bar for Mars 2112, also gone. I often wondered how many people flying in to JFK saw that bathroom photo and subsequently hailed a cab to 2nd Ave, LOL.

Putting up that apt complex and getting rid of the Mars Bar for me was a sign that our local officials had completely sold us out and the developers had won the culture battle.

Give it time. NYC's decline started in the late 1950s early 1960s. It took years for things to fully collapse. Wait a few more years. If midtown and conventions dont get busy and office workers stay home the city budget will collapse again. The feds won't bail out NYC every year. Commercial properties will decline in value. Tax collections go down. Stores stay vacant. Homeless are everywhere. Subway crime goes up Etc

Great shots plus Marty sitting on the bowl!

I still know plenty of artists and writers in the EV. Such populist commentary, as if you're saying something profound.

This Mars Bar post was an augur on what was to become to the EV.

You realized that only 10 years ago? Do the names Tonic or Sine sound familiar?

Sorry, the bathroom couldn't hold a candle to the hog pens at CBGBs.