Report of a slashing outside 7-Eleven on Avenue A 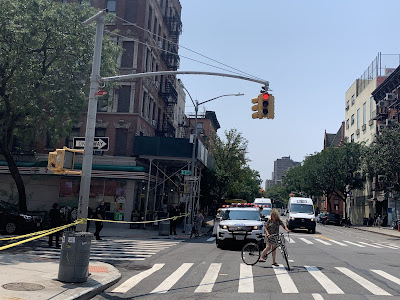 Just after noon today, multiple readers reported a police presence outside the 7-Eleven on Avenue A at 11th Street. (Thank you to Brian Katz for the photos.)
According to law enforcement officials at the scene, there was a slashing outside the store. (The Citizen app reported an "assault with edged weapon.") Police did not say what led to the attack or if the victim and suspect knew each other.
A police source described the victim as a white male. His injuries were not considered life-threatening. He was being treated at Mount Sinai Beth Israel.
Residents also spotted a trail of blood along Avenue A from 11th Street to 14th Street... 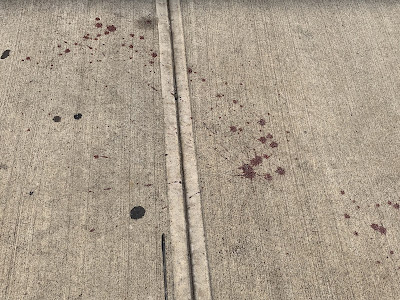 We'll update this post if any further information becomes available.
Posted by Grieve at 3:35 PM

At the same corner, there was a large police presence along with about 7 motorcycles on Sunday. Does anyone know what happened?

It would help if they took that damn sidewalk shed out, there are always people loitering underneath it and it casts deep shadows.

I was wondering what happened. The blood goes up to 12th Street and A and there was a bloody Covid mask in the street near the restaurant right there. I don't know who was involved in this but here have been aggressive panhandlers in front of that 7-11 since even before the pandemic and I avoid it when I see one of the guys out there because I don't want to deal with the hassle.

Eric Adams will make sure the rich get even richer, affordable housing continues to disappear, eminant domain will expand throughout the city and not just in poorer neighborhoods. He will be re-elected because even the De Blasio disaster did with the help of big developer money. The trilogy of horrible Mayors will soon be complete.

One of the things I hate about getting old is that young people think old people are grumpy and pessimistic. If they're reading the comments on this blog you'd be proven 100% correct. Give the guy a chance for Pete's sake! How noble would that be?

Loitering, panhandling, open container, are all nonviolent quality of life issues and nothing is going to be done Expect this to be the new normal all over. Go read some interviews given by the newly elected Manhattan DA.

Seriously.. So many people who spend 24 hrs a day online getting outraged, and have never ran a thing

“Give the guy a chance”

Where have I heard that one before? *Glances back 30 years...*

How about Adams campaigned on bringing stop and frisk back. Why would anyone want to give that idea a chance?