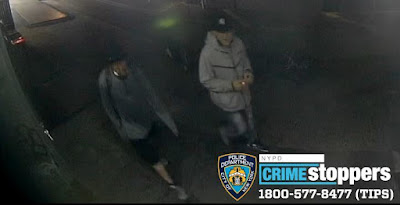 The NYPD is seeking two men they say have burglarized 10 businesses, nine in the East Village, over the past few months.
According to published reports, the suspects have taken more than $15,000 in cash and electronics between March and June from the businesses — eight restaurants and one salon.
Per The Daily Mail, "In each case, one of the crooks would burst through the front door after dark, and steal cash, electronic equipment, or both."
The Mail also published this map showing the businesses that the two men hit ... 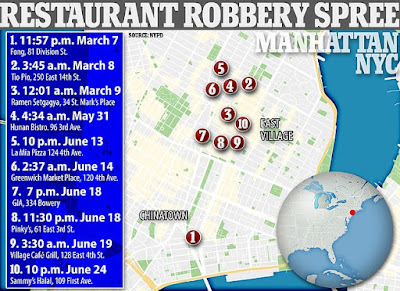 The NYPD released this video clip of the suspects during the most recent break-in — 10 p.m. on June 24 at Sammy's Halal, 109 First Ave. between Sixth Street and Seventh Street...

Per media accounts: Police described both suspects as men with light complexions between 40 and 60 years of age, standing between 5 feet 9 inches and 6 feet tall, and weighing about 190 pounds.
Anyone with information that could help in the investigation is asked to call Crime Stoppers at 1-800-577-TIPS (8477). You may also submit tips online. All calls are strictly confidential.
Posted by Grieve at 6:50 AM

Since there are essentially no penalties for stealing and looting, why not take the opportunity to rob a few stores?

I occurred to me that this may be another good reason to get rid of the restaurant sheds...I'm sure that in some cases they can easily obstruct visibility from certain varnish points creating an better situation for thieves. Like the stretch on First ave between I think six and seventh streets where the entire block is covered with sheds. If you're across the street, it's a total wall of plywood blocking storefronts.

@12:26pm: It has occurred to me that the sheds make an excellent place for muggers and robbers to conceal themselves.

As you point out, the sheds severely compromise visibility across the board. This *ought* to be of great concern to the restaurants themselves, and to every other business nearby, and of course to every person on foot!

Hell, given the nypd’s low arrest rate for just about anything, I may take this up as retirement income.