An encore presentation for the Pyramid Club on Avenue A? 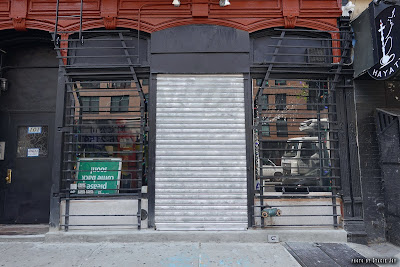 The Pyramid Club, the iconic East Village venue that shuttered its doors on Avenue A this past spring after 41 years, is now apparently primed for a comeback.
A tipster told us that the club, still doing business as The Pyramid Club, will reopen here at 101 Avenue A between Sixth Street and Seventh Street as early as Saturday.
A "House of Dance" party featuring DJ Force 1 was posted on the venue's Facebook page... the accompanying text states "The Pyramid is back in NYC"... 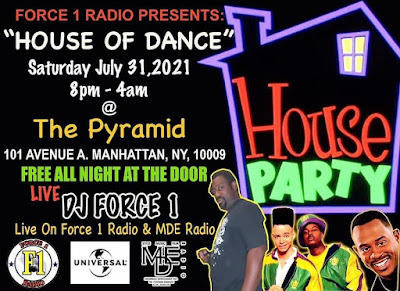 The event is advertised between 8 p.m. and 4 a.m. — with no cover charge.
EVG contributor Stacie Joy spotted someone inside the space yesterday... 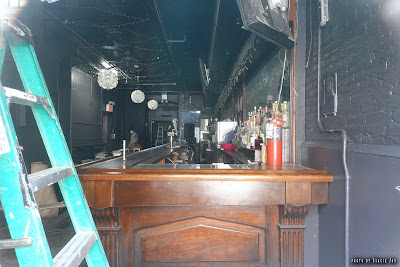 The Pyramid closed at the outset of the pandemic on March 7, 2020. The permanent closure was made official this past April 1, as we first reported.
Manager Maria Narciso and her fiancé, general manager and house DJ TM.8 (aka Quirino Perez), told Stacie the following about the closure back in April:

After many months of asking the owners about their reopening plans and always getting the same answer, "we're not ready, yet" and knowing that now we had a date from NYS/NYC to open on April 2, Quirino asked once again and received a text message reply stating that due to COVID-19, The Pyramid Club will not reopen.

And of the possibility of the Pyramid reopening under a different name or with new management:

For decades, managers have run The Pyramid Club with unfortunately very little communication from the owners. We don't know what their plans are, as they are very private people and rarely, if ever, talk about their business plans with us.

At this point, it's not known who might be running the next iteration of the Pyramid, or even if this is a long-term plan or simply a one-night event.

Since the closure, Narciso and DJ TM.8, who had been at The Pyramid Club for more than 37 years,  found new venues for their 80s dance parties, including Temptation Saturday a few doors away at Drom.

They also released a statement on Instagram "to make it clear that we are in no way associated with any event held at 101 Avenue A, and to remind everyone that we are no longer employees there."

The statement reads in part:

We cherish the times spent managing the venue ... We wish everyone who is involved with reopening well, much success. We want to remind everyone that they have every right to do as they wish with their business, and ask that their wishes be respected.
As we have no communication with the owners (their choosing), we may never understand the why, but we live by The Golden Rule, and never have ill wishes toward anyone. We are blessed to have found venues that have opened their doors for us and our community...
We ask our friends, family and loyal patrons to respect our privacy at this moment. We are not available to discuss anything related with the nightclub's opening. We understand that there's lots of speculation and rumors, and many others who love to create drama, so we remind you that whatever you hear or see written did not/won't come from us, as this is our only official statement.
The only request we have for the owners, is that they return the yellow pyramid logo to Quirino Perez, the rightful owner. This painting was created by his son, and given to his father as a gift. It was used above the entrance for many years. Quirino's son also painted the murals, Rubik's Cube and Pyramid Pac-Man, for his father, and those remain (we hope) at the venue.
When we were fired via text message, we felt for the community and found a way to encourage everyone to keep the Pyramid Spirit alive. We worked hard during the pandemic, during isolation, to keep our community strong with our Twitch livestreams, then we struggled through all the constantly-changing NYS/NYC Health Guidelines to start our live events, becoming the first event to take place in NYC during the global pandemic ...

We will continue to keep the spirit alive and remind you that Pyramid is just a building, the spirit is inside you and goes where ever you go. We will continue to take you Back to the 80s every Thursday, Friday, Saturday, and occasional Sunday and Monday.
We love you just as you are, and thank you for allowing us to follow our passions, and make a living doing what we love to do: Spreading Joy Through Music!

You can keep tabs on their events via this link.
Earlier this year, 101 Avenue A was listed on Loopnet for rent as a retail space. That listing, first posted on March 6, was subsequently removed.
Opening in 1979, The Pyramid ushered in an era of "socially-conscious drag performance, led by the likes of the Lady Bunny, Lypsinka and RuPaul," as Village Preservation once put it. In an oral history of the space, Tricia Romano noted: "[The Pyramid] served as a safe haven for freaks, geeks, weirdos, queers, and dreamers to come together and create. Sometimes it was bad; sometimes it was beautiful. But it was never boring."
Previously on EV Grieve:
• Packing up the last of The Pyramid Club
Posted by Grieve at 5:03 AM

Email ThisBlogThis!Share to TwitterShare to FacebookShare to Pinterest
Labels: The Pyramid Club

This is an extremely thoughtful statement put out by these former managers. If it were me in this situation, I wouldn’t have been this gracious or classy. If I had been with a place for 37 years, I’ll say again 37 years!, and the owners barely spoke to me and at the end you fired me by text message, I’d be telling you where you can stick that pyramid. Kudos to these two and good luck!

The hiring and firing by a private entity is nobody's business. Full stop. Period. I don't know all the particulars from each side and quite frankly don't want to know. Good luck to the next iteration. Hope they showcase new music, not just 80's stuff.

The pyramid is still an iconic institution with a great deal of meaning for those of us who went to real clubs in NYC growing up. I wish they had been more communicative to the former team-personally I will continue to support both the pyramid and DROM parties, as authentic club culture that is not just about bottle service needs to be a part of the community

It sounds like the owners wanted to make a change in who was running the place and didn't want to be honest about it so they said they were shutting the venue down. Why not be honest? It's so weird.

Drama aside, that advertised House Party looks lame AF compared to the previous nights/events. If that's the plan from the owners, they gonna have a hard time getting the crowd they want

I first went to Pyramid in 1981, I met the love of my life there in 1982 (we are still together). My roommate at the time because a legendary drag queen and today a world famous artist. I have many great memories of this place but we can never relive the past and as sad as it seemed when it closed I realize it was no longer the place it was back in the 80's and it's time to let it go. The same can be said of some many places from that era, treasure your memories and enjoy the present.

Nah dude, there's SO many venues in NYC that do new music, we don't need another one and def don't need it on Ave A. Go to Williamsburg if that's what you want.

trying not to get too excited. this was the one place in nyc that could not close. was absolutely heartbroken when it closed. ive missed it so much

but that flyer indicates it’s going to be totally different. def not a new wave/ industrial night like old saturdays

Sounds like you won’t be visiting. That’s cool. Let others make their own decision about it, though.