Spiegel said to be returning to 1st Avenue 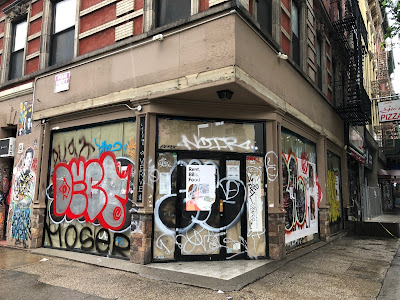 Multiple tipsters have shared the news that Spiegel will return to its former home at 26 First Ave. at Second Street.
Several readers say they have seen owner Shmulik Avital at the space in recent days. (He apparently confirmed the news of the return to one reader.)
There isn't any notice of a reopening on the Spiegel Instagram account, and no one responded to a message about the comeback.
The corner cafe that first opened in 2014 was serving takeout and delivery for part of last summer before going dark in early August. While there wasn't an official notice about a closure on any fronts, workers removed the signage on Sept. 9. The storefront has remained vacant since then.
Posted by Grieve at 4:55 AM

Hope it does. Good people there.

Used to live across the street. Never had a good experience there. Good to hear they’re opening though - good for the neighborhood.

Best news ever! Can’t say enough great things about this neighborhood watering hole, but 3 words can sum it it: BEST ISRAELI BREAKFAST! I don’t even know how they get their fries that crispy, they put all other fries to shame. Really crossing my fingers this tip pulls through :)

Woohoo! Best shakshuka in the city and always felt like a warm welcome when I treated myself to breakfast on the weekends. Very stoked to introduce our sweet, new family addition to Spiegel!

they haven't looked open at all but I've been seeing them on seamless for months, feels weird to order from a place when you don't know where they are cooking. I personally much prefer Mogador for similar menu items but happy for spiegel even if the staff is always too high to get your order right and their eggs are always overcooked.

Always liked it, good coffee and relatively relaxed during the day. Good service in my experiences.

I hope they do come back because I liked breakfast there.