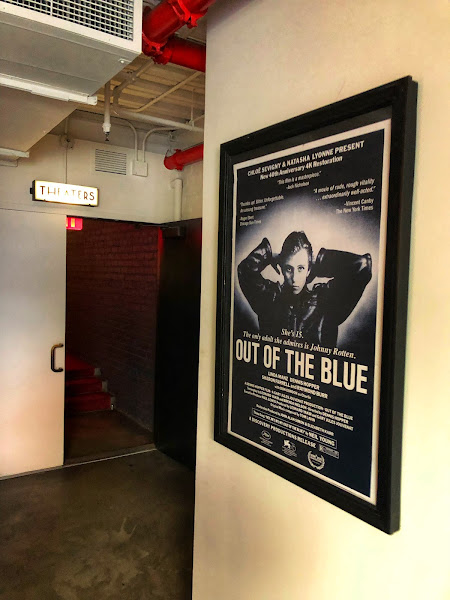 The new 4K restoration of Dennis Hopper's 1980 forgotten classic "Out of the Blue" is now playing at Metrograph, 7 Ludlow St.
You may know the backstory. "Blue" premiered at the 1980 Cannes Film Festival but reportedly didn't get a proper release because it was considered too bleak for U.S. audiences. Thanks in part to a campaign by Chloë Sevigny and Natasha Lyonne, "Blue," a grim, unsettling film featuring an extraordinary performance by a teenage Linda Manz, is receiving a theatrical release. 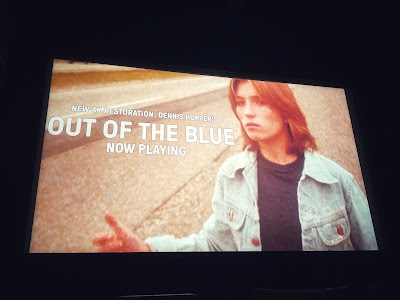 The thumbnail plot via IMDB: "A young girl whose father [ed note: played by the very Dennis Hopper-y Dennis Hopper] is an ex-convict and whose mother is a junkie finds it difficult to conform and tries to find comfort in a quirky combination of Elvis and the punk scene."
And it may be the most punk rock movie ever made. Per a 2019 essay by Sheila O’Malley at Film Comment:

"Out of the Blue" howls from the center of the whirlwind. Up through its violent and inevitable ending, the film takes punk rock at its word

Our culture rarely welcomes a vision as nihilistic as "Out of the Blue." But the film has a tremendous and frightening power. The most punk rock thing about it is that it stares "into the black" — and it doesn’t blink.

I haven't stopped thinking about the film since seeing it yesterday. You can find the Metrograph showtimes here. The film is also part of Metrograph's "Punks Don't Go Home for Thanksgiving" series.
Posted by Grieve at 9:00 AM

I just went to Angelika Village East and am glad they’re still around. Will have to travel on down to Metrograph for something interesting, as Dune was very “paint-by-numbers”.

Speaking of punks, "The Velvet Underground" is playing at the Film Forum. Definitely worth seeing. The singer Nico, who is profiled, lived at 101 Avenue A. Lou Reed and John Cale lived at 56 Ludlow Street.

Velvet Underground have nothing to do with punk.

They were pre-punk punks.

From IMDB: "Linda Manz passed away (8/14/2020) from pneumonia and lung cancer less than a week before her 59th birthday. Upon her death, she was cremated and her ashes returned to her husband."

My favorite film. I wish it would run longer.

I saw Out of the Blue this weekend also -- such a great film! I especially loved how the scenes in the punk club were the only place where genuine emotions could be expressed. The producers spoke in person before the showing about their 4K restoration, even though the Sunday afternoon house was small. It was my first time seeing the film and first time at the Metrograph, whose offerings I'm going to have to pay attention to now.

Saw it when it came out. Meh.
Shocked to hear about passing of Manz. Really liked here in Days of Heaven