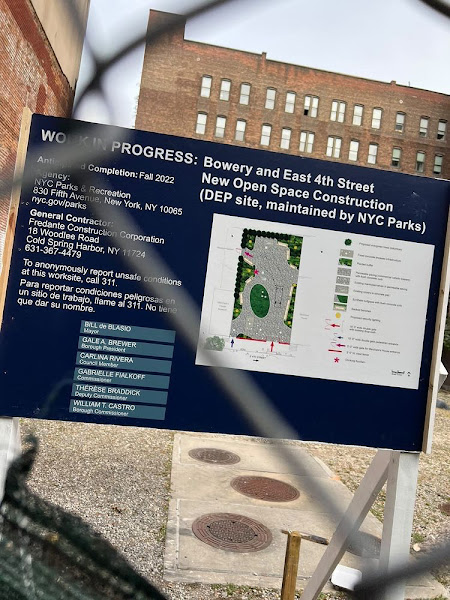 Construction is now underway on an open green space in the long-vacant lot on Fourth Street between 2 Cooper Square and the Merchant's House Museum. (Thanks to the EVG reader for the photo!)
Since the 1990s, the Department of Environmental Preservation has used this city-owned space to work on shafts connected to the underground network of tunnels that supply NYC's drinking water.
Several years ago, there were public meetings to gather ideas for some sort of "passive recreation space" here between the Bowery and Lafayette.
Here's a look at a schematic via the Parks Department website ... (click on the image for a better view) ... as you can see, the space will include benches, synthetic turfgrass and some trees... 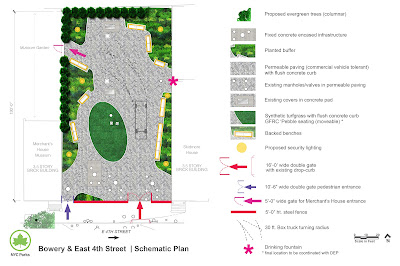 This project, which dates back years, was funded by Mayor de Blasio and now-former City Councilmember Rosie Mendez. Per the Parks Department, work here is slated to be complete in October 2022.
Posted by Grieve at 5:30 AM

Nice to have some open space. But how green is it? There is a lot of cement or asphalt depicted in the drawings.

Damn. I was looking forward to a 10-story glass box that destabilized Merchant's House as a bonus.

Agree with Brian, not exactly a green, as in living plant life, space at all. I know grass is not sustainable in a most spaces like this one (people will bring their dogs to make it a toilet) but the planting beds are about 15%-20% of the surface. One more bad choice is the five foot high fence. Are they kidding??? Unless this lot is locked with bound with a 8 foot fence all kinds of shit will go down in the evenings. The Merchant House Museum will be tagged daily, and their garden will give access to the property itself. These design problems could be corrected but most likely those which designed it don't live in NYC or have a utopian idea of humans and public spaces.

8:22 nails it, it will be a cesspool that will be quickly locked up most of the time. Parks were designed for recreating, not living and commerce.

Astroturf and gravel/concrete - really? I encourage the NYC Parks Dept to hire Elizabeth St Garden, More Gardens, or LUNGS to (re)design this lot for New Yorkers who want to enjoy being in a park.

The long-empty lot on C/14th has become a lovely natural wetland. I wonder if there are fish or frogs, that's how established it is, and if so, how they would get in there.

To some of the above comments, if my memory serves me correctly I believe the lot is dotted with vents throughout. So that may be the reason for limited vegetation depicted in the rendering

Yes I believe they have to maintain its primary function as an access point for the water that all of us tap-drinking plebs rely on. No trees with roots in the middle digging into the infrastructure.

As far as C and 14th, we have raccoons now. I like the frog idea.

"Synthetic turfgrass?" I just threw up in my mouth a little.

Next thing, they'll be redecorating the Merchant's House, with a 70s "shag" theme.

That's right! Read more about it at Water Technology.

1.25mm to build this out - seems very high for a patio and a bush