Photos and reporting by Stacie Joy
An outpost of the Brooklyn-based Poetica Coffee will be opening at the SW corner of Second Avenue and St. Mark's Place, the longtime former home of Gem Spa, the iconic newsstand-candy shop.
Owner Parviz Mukhamadkulov (pictured below) received the keys to the space — officially 36 St. Mark's Place — on Friday. This will be the second Manhattan location for the brand, which has seven spots in Brooklyn.
Mukhamadkulov, from Uzbekistan, has said that he has wanted to own his own café since he was a kid and watched his father work as a coffee wholesaler. 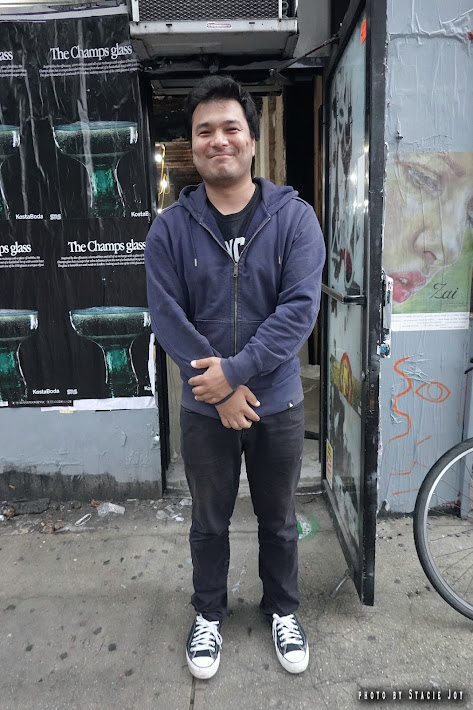 The café will serve housemade pastries, including croissants and several varieties of baked pierogies, which are more popular in central Asia as opposed to boiled or fried dumplings... and with coffee beans from a roaster in Brooklyn. With the landlord's permission, Mukhamadkulov would like to add an enclosed sidewalk cafe on the St. Mark's Place side.
Mukhamadkulov said he didn't know about the history of the space when he first rented the storefront (there wasn't any mention of the previous tenant in the marketing materials) ... and he has since explored the history of the address... and reached out to Parul Patel, who ran Gem Spa in recent years, with an offer to sell their merchandise free of charge.
He said he wants to honor the location's legacy and has "big shoes to step into."
Here's how the interior looked as of Saturday... 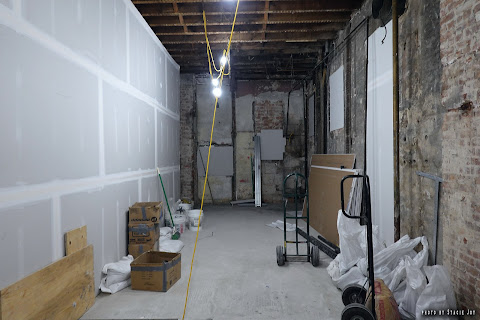 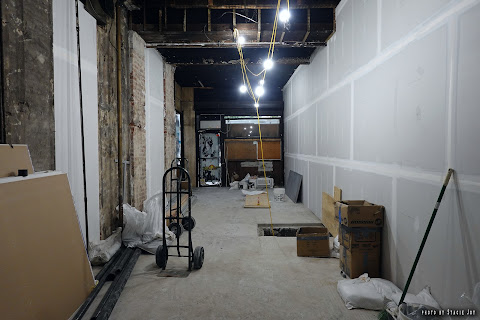 Gem Spa, home of the egg cream according to some sources, officially closed in May 2020 amid ongoing financial challenges worsened by the COVID-19 pandemic.
Parul Patel, who had been running the store that her father Ray owned since 1986, made a gallant effort to save the iconic corner shop that dates to the 1920s. This post has more background on Gem Spa's last few years.
And more history, via a Vanity Fair piece from May 2020:

The tributes that followed Patel's closure announcement ... teemed with references to the art in which the store had served as a backdrop: Madonna's turn in "Desperately Seeking Susan"; Patti Smith writing about going for an egg cream with Robert Mapplethorpe in her memoir "Just Kids"; a pair of lines from an Allen Ginsberg poem ("Back from the Gem Spa, into the hallway, a glance behind / and sudden farewell to the bedbug-ridden mattresses piled soggy in dark rain"); the back cover of the New York Dolls' first album; the title of a 1982 Jean-Michel Basquiat painting; Lou Reed's song "Egg Cream.: The works traced a timeline of the East Village that both belonged firmly to the 20th century and remained top of mind.

He looks like a TERRIFIC guy..Welcome to the Neighborhood!

This is awesome. I’m so happy to hear his story and also that he will honor Gem Spa 😭. I will definitely be stopping by. I heard this landlord is incredibly difficult, so I hope he’s able to secure that enclosed cafe!🤞🏻

Those pierogis sound great, and add a new twist to an old neighborhood favorite.

Lou Reed's song is most definitely NOT about the Gem Spa egg cream. The song references Lou's real or imagine childhood in Brooklyn. It's specifically about the egg cream served at "Beckys on Kings Highway" and "Dave's on Canal." Sloppy *journalism* by VF.

and if you click through to the GEMSPA merch page, there seems to be a Memorial Day sale still going on at 20% off!

Very cool gesture on Parviz’s part. Happy to have him in the neighborhood! And honestly just thrilled that it’s not going to be a bank.

On to the next chapter! Best of luck, I’ll check them out when they’re open.

Finally!!! Someone who cares about history. I know progress waits for no one, but at least this man seems to have his priorities straight. Thanks to this article, I’ll support his business! Thanks again EV Grieve for giving us the 411.

Best of luck to Parviz and team, welcome to the neighborhood! I'm happy to hear new business owners are still interested in the history of the neighborhood. I'll be in to try a coffee and a pierogi when you open!

So interesting story about this place , all New Yorkers worried who will get this place. Wish new chapter of this corner will start with Poetica coffee ☕️ Welcome to East Village and good luck ;)

Big shoes to fill, but I wish them the best of luck!

But will he sell egg creams?

Nice to hear that they are paying respect to Gem Spa and neighborhood history!! I wish them luck!!🍀

Can’t imagine what the rent is but I wish this guy the best. And thank you for not selling alcohol or smoking paraphernalia!

Hope. He sells egg creams but we still have Ray’s on Ave A thank God

Thank goodness it’s not another space by alcohol dealers. Good luck to him!

Egg cream in my way to work for years. Gem spa sold magazines for my subway ride.
Uzbek. You are welcome to bring a dumpling and photos on the walls.
A memory.

Better than a bank.

Welcome to the neighborhood. Thank you for respecting and honoring it. Best of luck.

I will check it out.

When it is gone, it's gone. This guy does not owe anything to acknowledge Gem Spa used to be there. Everyone in the public could have come to Gem Spa when it was open and supported it by buying stuff. Gem Spa sold a lot of newspapers and magazines in its day, it was mainly a newsstand when I remember going there for a newspaper and diet coke whenever I passed by in the 1990s. What am I trying to say? It's gone, Covid was the last straw but the fact that people read news and infotainment online on their phones instead of on paper meant that they lost a ton of their business.