About this time last year 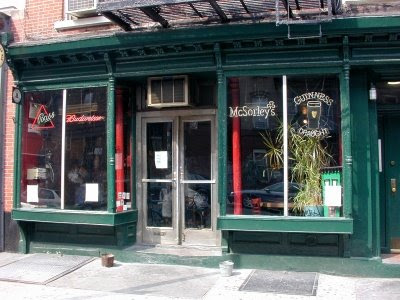 December 20, 2007 -- It may be the final nail in the shared coffin of East Village dive bars. Two longstanding holes-in-the-wall, Sophie's on East Fifth Street and its sister spot, Mona's on Avenue B, are up for sale. "The neighborhood has changed so much," co-owner Bob Corton told Page Six. "I love both bars, but they're dinosaurs now." Corton plans to sell the low-lit saloons after the holidays. He has run Sophie's, which adopted its name from its original owner, the late Sophie Polny, since 1986. He opened Mona's in '89. Corton assured us he'll stay in the neighborhood but couldn't predict the future of his beloved drink tanks: "Once the places are sold, what happens to them is really out of my hands."

Sure, we had heard rumors that the bars might be for sale, but it didn't seem like a reality until it appeared in print. (How this ended up in print may be fodder for another post another day.)

So what started back in December 2007 on a drunken, lonely night (always a good combination for doing something stupid, like starting a blog! Plus, actually, it was the middle of the afternoon!) seemed like a temporary thing. At first I'd just collect different news items on the possible sale of the bars. (It wasn't to be gossipy or anything, like, "Melvin wore the same pants again today and drank 17 pints of Yuengling...") Then I thought it could evolve into this project we could all be part of...making little films about the people, etc., who've made Sophie's what it is. Post photos. Chronicling the (possible) end of days. It would be a document capturing a special time and place.

Well, before I ever really figured what to do with the site or told anyone about it, it looked as if the bars were staying in the family. So I retired the site on that positive note.

Right-o! Then, on Feb. 6, Jeremiah Moss, who had been supportive of whatever I had been doing, left a comment encouraging me to continue, to turn my attention to other things in the neighborhood.

Jeremiah Moss said...
hey grieve, whether or not sophie's goes, i hope you'll continue to blog about stuff in our neighborhood. there's plenty of bloggable material to go around!

So, yeah, I continued. Slowly at first. But I was inspired...I began paying attention again to the little things. I became reinvigorated despite the bankbranchification, duanereadification, etc., etc., of the area. I started loving living here again. Really.

Anyway, here I am...grateful to everyone who has been a reader...and I've enjoyed making friends with so many like-minded people who also wonder what the fuck is going on around here. Thank you for being part of this.
Posted by Grieve at 7:00 AM

EVG, you rock. i'm glad you decided to stick around and branch out. the city is better for it. happy anniversary!

Thanks for staying and giving even more to us devoted readers. Wishing you and Mrs. Grieve and family Happy Holidays!!!

That Jeremiah.. He's like the EV blogger's daddy. Glad he encouraged you to keep going, I love your stuff and humor. J checked in on me this summer when I had disappeared for a while and encouraged me too. We all need to keep our eyes open for the sake of the neighborhood. And Merry/Happy to you and the Mrs.!

Hi all...many thanks for the kind words! Happy holidays to you too.

happy anniversary dude. your site and content continues to be an inspiration.

Glad you decided to stay with it.

I'm glad to hear that you love living in the EV. With the name of the blog and the tone of most posts, I thought you loved the past but didn't like the present.

There are very few blogs I make a point to read every single day. But yours, my friend, is one of them. Keep up the good work. Fight the good fight. Honor the fire. Fake not the funk, etc. etc.

Wow....I really appreciate the kind words...Thank you very much. All the best to all of you this holiday season...