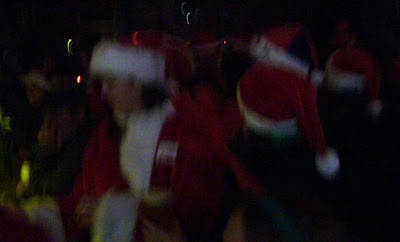 Remember in Night of the Living Dead, when Ben boards up the farmhouse to protect himself and that useless Barbara from the zombies outside? Oh, no reason that I bring this up...just that during the last two Saturday afternoons, the East Village was host to several particularly larger-than-usual pub crawls.

On Dec. 6, I ran into a group (40 to 50?) around 1:30 p.m. who were on some golf drinking game. They started at 7B, then to Manitoba's. According to the "required behavior" on a sheet one of the pub crawlers showed me, you had to "speak with Canadian accent re: ice fishing, hockey, Inuit culture, donuts. French Canadian is acceptable" while at Manitoba's. Maybe this is funny in the pub crawler's universe.

Then, it was Zum Schneider, where pub crawlers had to "talk like a Nazi. Every other sentence must be 'Zat's what she said.' Or. 'Zat's what he said." The tomfoolery continued at Kate's Joint, Croxley Ale House, The Library, Essex Ale House, Arlene's, Motor City (where they were to sing Bob Seeger songs and curse the automakers and bailout) and, finally, Mason Dixon. Oh, and everyone was dressed in doctor's scrubs, golf duds or pajamas.

Last Saturday afternoon, there was a Santa pub crawl (not part of Santacon, which is a whole other story) nearly 100 strong that I encountered on Avenue A. Two of the participants, women roughly 25 years old, asked me where Sophie's was. They were nice enough for being so drunk (already) and oblivious to their surroundings. They were coming from the Double Down. After Sophie's, Niagra was the next stop. I asked them some questions. Where else were they going? Well, hard to say. The one had the list written in pen on her arm and the ink was starting to smudge. They lived in Hoboken. This crawl was some officewide thing that grew. They did it because "it was a fun way to spend a Saturday afternoon."

Except if you live here.
Posted by Grieve at 7:00 AM

Given that Manitoba is from the Bronx, this is beyond stupid. What they should've been doing was talking about Manitoba's obsession, the Yankees.

The pub crawlers definitely didn't seem like fans of the Dictators....