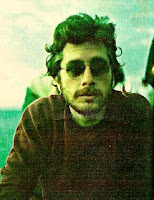 Speaking of the St. Mark's Bar & Grill, Matt Harvey profiles author Michael Largo — the man who owned the bar — in the latest Chelsea Now. Largo (pictured right from the old days) recently saw the publication of his latest book, "Genius and Heroin." To mark the occasion Harvey and Largo went on a mini walking tour of the East Village:

Largo, a compact man with a gray-flecked auburn goatee, spent the 1980s owning and operating the legendary St. Marks Grill, which sat on the corner of St. Marks and First Ave. Since then, the generic black canopy façade of the lounge Tribe has erased all evidence of his bar; it served as a louche retreat for Joni Mitchell, pop art “godfather” Larry Rivers and — for a short time — Keith Richards. (The Rolling Stones used the Grill as the setting for their video of “Waiting on a Friend,” their jazzy portrayal of coolly anticipating the drug connection.)

“The first thing Keith asked me when he came into the bar was ‘Where can I cop?’” Largo said, perfunctorily tossing off a worn over anecdote. “My liquor license is right above my head and cops and producers are around.” A smile crept to his lips, as he continued. “I said, ‘Here’s a bottle of Jack, that’s all I can help you with.” His barroom charm managed to infuse his name-dropping with some life.

Twenty-five years, and several layers of gentrification later, Largo — who moved to Miami in 1990 and stayed there — couldn’t find his bearings in his old neighborhood. His usual wry grin turned slack and he said; “Back then this whole area was just people who were into art and you know…” His soft, Staten Island-accented voice broke up into a slightly sinister laughter.

Previously.
Posted by Grieve at 6:59 AM