On the Bowery: "It's old versus new -- and these days new would seem to have the upper hand" 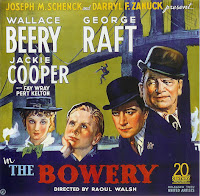 The real estate section in the Post today takes a look at an up-and-coming part of town called the Bowery. Sounds interesting.

Street gangs, brothels, flophouses, Joey Ramone - at one time or another, the Bowery has played host to them all. Of the many Manhattan areas to have transformed over the last decade, the Bowery has to rank among the unlikeliest.

Transform it has, though. Homeless shelters like the century-plus-old Bowery Mission still dot the street, and lighting and restaurant supply stores still dominate the retail scene, but gentrification is most definitely on the march.

Yes, the Bowery is booming. Prudential Douglas Elliman broker Rob Gross has worked in the area for more than 20 years. He remembers selling real estate on the Bowery in the early '90s, returning on some occasions from showing apartments to find his car broken into.

"It was definitely off the grid a bit back then," he says.

Today, Gross is handling the new Bowery and Bleecker development - a three-unit building of floor-through condo lofts that includes an 1,862-square-foot penthouse with a private roof deck that's listed for $3.1 million. With Poliform kitchens, 50-inch plasma-screen TVs and prices starting at about $1,500 a square foot, the building is a world away from the formerly dodgy Bowery.

"The Bowery is one of the last areas in New York to experience a kind of seismic shift," says self-storage magnate and neighborhood developer Adam Gordon. "It's an interesting bridge neighborhood. It's at the crux of NoHo, SoHo, the East and the West Village. There are few places that have the access that this neighborhood does."

Gordon owns a plot of land just off the Bowery at 41 Bond St., which he plans to develop as an eight-unit luxury condo building once the financing environment improves. He also owns the Bouwerie Lane Theatre building at the corner of Bond and Bowery, part of which he's recently turned into three condos. One apartment is reserved for Gordon himself, and he plans to put the other units - a 5,200-square-foot triplex penthouse and a 2,500-square-foot full-floor apartment - on the market in March.

It's the Cooper Square Hotel, however, that provides perhaps the best metaphor for today's Bowery. Because two residents of the apartment building next door at 27 Bowery refused to give up their units, the hotel was forced to build around them and incorporate their building into its design. And so at the northern end of the street, there sits an old brick tenement building that from the sidewalk looks as if it were being swallowed up by a sleek, glassy high-rise hotel.

It's old versus new - and these days new would seem to have the upper hand.

Or, as Gordon says when asked if he fears the loss of old, edgy Bowery he once knew, "I don't think it's fear. It's an inevitability."

Email ThisBlogThis!Share to TwitterShare to FacebookShare to Pinterest
Labels: gentrification, the Bowery, too many condos

Yea, a hole. Who wants messy history around to destroy your new plastic vistas? I was talking to a resident of the Sunrise hotel a few weeks ago. He says they still have a pretty good deal there, low flophouse rates and they can't be thrown out. But how long can Sunrise and Bowery Mission last amid the fur and $$$$ finery?

Where is the entrance now to the Sunshine? The former front door, now directly adjacent to the museum, is boarded up.....Right?