A few things about Woolworths

The City Room had a fun piece the other day on the old Olympic-size swimming pool in the F.H. Woolworth Building on lower Broadway.

An early promotional brochure for the building promised tenants an “immense Swimming Pool and Turkish Bath establishment, open day and night,” equipped with “every modern device making for comfort, safety and sanitation.” This was in addition to the Postkeller restaurant, the barber shop and the Hospital Room “for female stenographers, clerks and others, where they may receive first-aid treatment and simple remedies at the hands of a competent nurse.”

Speaking of Woolworth stores, which closed for good in the city in 2001, here's some footage of the old Woolworth's location in downtown Flushing from 1997:

Which reminds me of eating at the Woolworth's lunch counter on 14th Street...and wasn't there one on Park Avenue South around 23rd Street? The food was pretty awful at times, but it was cheap, of course. 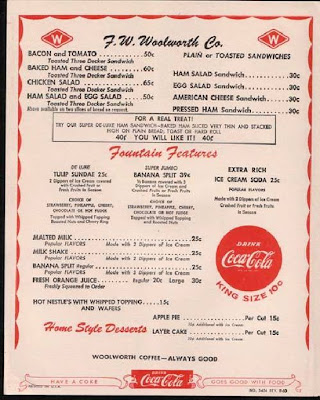 Where exactly did the Woolworth on 14th used to be? Just curious.

There was a Woolworths on 37th Street and 3rd Ave where I bought a "pencil cactus" in 1988 that they had on sale for $3. I still have it!


I'm thinking it was on the south side of the street...between University and Fifth.