Appreciating the photography of Laura Levine 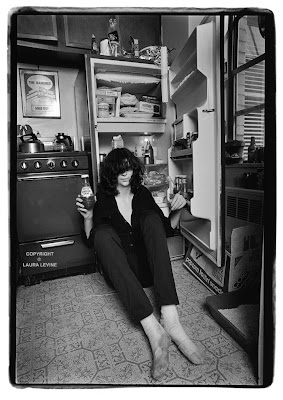 Rockcritics.com has a three-part Q-and-A with Laura Levine, the renowned photographer whose work has appeared in The Village Voice, Trouser Press, Musician, Rolling Stone and New York Rocker.

As Rockcritics.com notes: "Levine’s photography resumé reads like a Who’s Who of those loopy years following punk and disco: from early snaps of Prince and Madonna (pre-world domination) to photogenic weirdos like Captain Beefheart, August Darnell (a.k.a. Kid Creole), and Bow Wow Wow’s Annabella Lwin to No Wave shit disturbers D.N.A. and Glenn Branca to new romantic mop-fops Yazoo to rap icons Run-D.M.C. and Afrika Bambaata to hardcore visionaries Black Flag and X to… well, you get the picure." Indeed.
Posted by Grieve at 6:51 AM

Laura runs a really great vintage/junk shop up in the Catskills called The Mystery Spot. It's in a little town called Phoenicia. Always on my list when I head up there.