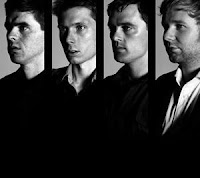 From the Times, in honor of the band's new album out today:

It was around 3 in the afternoon when Alex Kapranos’s hangover began to wear off. Mr. Kapranos, the lead singer of the Scottish rock band Franz Ferdinand, and his bandmate Nick McCarthy, who plays guitar and keyboards, had spent the previous evening in a refined version of debauchery. They went to a concert — by the British group the Last Shadow Puppets — followed by a late-night feast at the Spotted Pig, the West Village gastropub. Mr. McCarthy capped it off with some dancing at a downtown club, staying out until 5 a.m.

Now both were sitting at Momofuku Noodle Bar in the East Village, recovering.

“No hot beverages,” she replied. They ordered water.