Sounds boring to me! I want to go shopping! Still, if you must. "Life on Marzzzzzzzzzzzzzzzzzz" returns to the telly on Wednesday night after a hiatus...and the Times today takes a really loooooong look at the show set, in part, in the gritty 1973 NYC, and wonders..."[W]ill people continue to do so when the city feels as if it could be slipping back into those dangerous, crime-ridden days? In other words, will these people still want to look back at this era — fondly or otherwise — as the New York of 2009 increasingly comes to resemble its ’70s-era ancestor in all the wrong ways?

How about more Gretchen Moll? Then we'll looking back fondly. Or something. To the article!

“The image of New York is important to New Yorkers, and it’s part of their self-image,” said Jonathan Mahler, the author of the 2006 book “Ladies and Gentlemen, The Bronx Is Burning: 1977, Baseball, Politics, and the Battle for the Soul of a City.”

Many people who stuck with the city through tougher times now feel that they have a stake in its continued prosperity, and, he said, “are now sticking out their chests a little bit. ‘Yeah, I may be living in this little studio apartment, but I’m making it and I’m surviving here.’ ”

Not that New York was utterly beyond redemption in these bygone years: As a kind of modern-day frontier town, Mr. Mahler said, it was teeming with peril, but also with frantic energy and with havens where experimental subcultures could flourish.

“As parts of the city became abandoned and forgotten, they would be taken up by these urban pioneers who would use them for their own purposes and create interesting things there,” he said, pointing to the gay culture of the West Village, the punk rockers of the East Village and the nascent art scene in SoHo, all of which emerged during those years.

Mr. Mahler added, however, that that the 1970s were not in any way a better decade to be living in the city. “I’m much happier to be living here and raising my family in New York now,” he said. “Or at least I could have said that six months ago.” 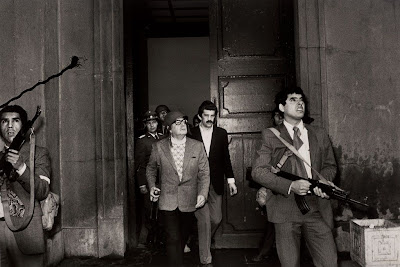 AS the New York of today continues to look more like its unsavory 1973 self — a declining economy, upticks in violent crimes like murder and bank robbery and an ever more crumbling infrastructure starved for resources — it remains to be seen whether the romantic feelings of the “Life on Mars” creators (and its viewers) will endure. After all, who wants to turn on a television and be reminded of the bad old days when evidence of bad new days can be seen right outside your window?

Damn..beat me posting this. Read this article yesterday, but didn't have my laptop. Life on Mars maybe breathing a new life after this article.

Yeah, I may give the show another look...And post this as well! You have a good perspective on the show and why we watch it...

Thanks for calling attention to this article. I was a young adult, wife and mother during the 70's and remember it well. I grew up in what is now the South Bronx and went to high school and college in Manhattan and lived in Inwood section of Northern Manhattan from 1972 - 1985.. I remember well Times Square circa 1970 through 1985 and it was a place to be avoided, at least when walking alone. Those were tough times. My dad was a police officer and he had a heart attack during the looting in the Bronx (black out 1977). NYC was not a place to raise a family back then and I eventually moved to 1985. Now I do enjoy going into Manhattan, see old friends and exploring alone neighborhoods I would not have stepped foot in back then. That said, I do miss the New York accent, the toughness of the native born and the rapport we shared. I guess I live between both worlds - much like the main character in Life on Mars.

Thank you for sharing...

I love your blog so thank you for sharing. I admire how proflific you are and I start each day knowing I will learn more just by turning to your website, particulary for the old photos, the links to the Times and whats new on TV and the movies. . My best friend grew up on the Lower East Side on Henry Street, not all that far from the EV. I often pass along what I learn from you. Many thanks.
Laura S.

In 1973, we had something vital that has been eroded: freedom. By the early 1980s, we still had a pile more freedom than now, without being even one of the 25 most dangerous cities in the U.S.

Now, if you were gay or black or female, you've gained a lot of equality since then, and that might offset the erosion of the first, second, and fourth amendments, but for the culture as a whole, what everyone used to be able to do, we've lost.

We've homogenized. New York, like Berkeley or Burning Man, was a place where you could bend the rules. Now, all those places are turning into law-abiding blandness, letting freedom be taken, die in the hearts of humankind, because Americans no longer care about it. Because we've forgotten that freedom and democracy means putting up with stuff you really hate, and sometimes going to jail and getting beaten up by cops.

I will happily take more crime in exchange for freedom. My cars and those of my friends were broken into, my stepsister burglarized, my dad's office window broken by a bullet, a mob of homeless people surrounded me once, sticking their hands in my pockets; I'll take all that to have squats back, teenaged illegal immigrants being taught to drive on Dykeman Avenue, pot parades, clubs that blast music all night and have fights spill into the street, a Korean grocery with computer tools in a back room, a store that only sells wind-up toys or hot sauce, riots over homelessness; those things are freedom, life, human expression, and can't really thrive anyplace else. Those things are American.

You want a safe place to raise kids?

Our country is covered with them. Move to Brooklyn or Queens or (Oh, the horror!) New Jersey. But a place to do the kinds of things you used to be able to do in New York? There is no-where else, and we're letting it be killed.