The Chocolate Bar heads back to the West Village...which means the House of Cards & Curiosities is closing

The Observer follows up on my post that The Chocolate Bar shut down its East Seventh Street location rather suddenly last week. They spoke with owner Alison Nelson.

“More of our customers came to the Bendel’s location for Christmas than went to the East Village,” she said. “And I think a lot of it is because it’s freezing cold outside and nobody wants to walk however many blocks from the trains or take two buses where it’s easier to hop off the F at Sixth Avenue and — boom! — you’re right inside Henri Bendel.” [EV Grieve editor's note: Oh, the temptation to make a comment about this...]
Yet, her bittersweet saga also took a rather tasty twist.
“When we last saw each other in April, I was freaking out because I couldn’t find rent in the West Village for anything that was affordable,” said Ms. Nelson, who reluctantly shuttered her original Chocolate Bar location at 48 Eighth Avenue last spring after finding larger, less expensive digs across town. “And the weirdest thing happened. …”
Cue international economic crisis!
Eight months after abandoning her beloved but overpriced West Village, Ms. Nelson is now returning to the very same street—“never mind the same neighborhood!” she said. “Literally, diagonally across the street from where it all started and personally where I feel Chocolate Bar belongs … The West Village, for me, is home.”
Ms. Nelson has signed a new lease at 23 Eighth Avenue, taking over the current House of Cards & Curiosities, whose longtime operator is planning to retire.

Oh, so I guess this mans that nice little mom-and-pop shop House of Cards & Curiosities is closing. 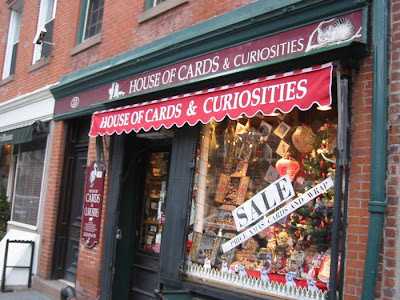 Email ThisBlogThis!Share to TwitterShare to FacebookShare to Pinterest
Labels: and stay out, East Seventh Street, mom and pop shops continue to close, The Chocolate Bar

thanks for the visit, EV

I love that card shop. I always buy my Christmas cards there; in fact, I always stop at the Christmas tree stand up the street, and buy a mini-tree, on the same day I buy my cards.

Alas, another overpriced "lifestyle" store for the rich and famous...

The Chocolate Bar, that is. Not the card store.

Phew! Good thing I read this update in time. I was so sad when I heard the east village location was closing. I did not even get to visit that new location.

There is a “news” story circulating, whose source is a column in the New York Observer of Jan. 20/Jan. 26, 2009, that the Chocolate Bar has signed a lease and is moving into the space now occupied by House of Cards & Curiosities at 23 Eighth Ave. and that Chocolate Bar will be operational in its new location before December 2009. Every aspect of the New York Observer story that relates to House of Cards, i.e. that Chocolate Bar has signed a lease and will begin construction at 23 Eighth Ave. this summer, that the “longtime operator” of House of Cards is “planning to retire” and that Chocolate Bar will be functional at 23 Eighth Ave. in time for “the traditional peak chocolate season in December,” is absolutely and categorically false. As the owner of House of Cards, I have no intention of retiring; my present lease extends to 2010 and I am currently renewing the lease for many years to come. News of the store’s demise is premature and potentially damaging to my business. By the way, the photo of my storefront posted on EV Grieve shows a post-Christmas sale of three years ago.