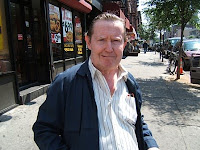 I recently posted a link to the Village Voice's obituary of longtime EV resident Richard Leck. Without any living relatives, there was concern that this veteran might be laid to rest in Potter's Field. Here's an update from the Voice:

Richard Leck, the East Village habitue whose death we reported two weeks ago, was buried today in Calverton National Cemetery on Long Island.

Leck, 75, a former soldier, died of heart disease on Dec. 19 without next of kin. His friends had contacted the Voice because they feared that he would end up in a pauper's grave.

But the city Medical Examiner, the Mayor's Office of Veteran's Affairs, the VA, and a coalition of veteran's groups got together in impressive speed and took care of the transportation and burial of his body.

In other words, the system worked. Kudos to them.

We wrote about Leck because he was one of that disappearing class of people who make the neighborhood colorful and interesting.