The Trump SoHo feature: All is well here! 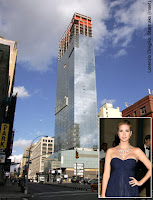 The piece is so full of whoppers, it's hard to know where to start. So how about here:

"[Trump SoHo] is a fantastic emblem to have on the corner," says Prudential Douglas Elliman's Frances Katzen, who is selling the Renwick, a condo building set to rise in Hudson Square. "[But] the building has had a lot to overcome."

Despite protests from neighborhood groups and other controversies -- including the discovery of a 19th-century African church burial ground on the site -- Trump is rising quickly.

"We thought there was a place for younger product downtown," says Ivanka Trump.

Phew! Did away with those "controversies!"

All the "Rock, Hudson!" author had to do was pay a visit to Curbed or maybe just read the headline and second deck of Michael Idov's feature on the property last March 30 in New York:

Trump Soho Is Not an Oxymoron
It’s a 46-story skyscraper being built on a graveyard that’s brought together shadowy Russians and a billionaire brand name to attract internationals in a zoning-skirting scheme that’s enraged the neighborhood, sent glass shattering to the street, and killed a construction worker. It’s New York in the aughts, and inside there’s a luxury suite just for you.

The worker's name was Yurly Vanchytsky. He lived in Brooklyn. He died last Jan. 14. According to reports, he fell 42 stories when he was knocked over by a wooden form used to set concrete collapsed as it was being moved by a crane.
Posted by Grieve at 8:07 AM