Yesterday, we learned that maybe we won't want to watch realistic fare such as "Life on Marzzzzzzzz" since we'll all be out in the streets shooting each other and who needs TV when there's reality right out the window. Or something sort of like that. Today, the Post has a piece titled:

It feels like a flashback to the 1980s on city streets -- an era no one's nostalgic for.

Overstretched cops are struggling to combat petty crime, according to police sources -- resulting in an easing of enforcement that's taking Manhattan down fast, angry New Yorkers told The Post.

"People tell me they're scared to come here," said Greg Agnew, owner of the East Bay Diner on First Avenue at 29th Street. "Guys are hanging out in the street, doing things they're not supposed to be doing, loitering. They cause fights. They urinate on the floor, There's drug use."

How about the East Village?

In Alphabet City, residents are seeing signs of decay.

"You're seeing empty drink bottles in the street, you're catching people urinating. They're 'tagging up' [spray-painting graffiti]," said Anibal Pabon, 44, an office clerk. "All that stuff is coming back."

(Hmm...public urination: future trends piece!) I don't mean to make light of any of this...I've noticed a difference...The cynicism comes from how the media are portraying all this...Building an entire crime-trends article around the quote from one NYU student, for instance. So we're right back to the bad old days of the 1980s? (Or, in he case of the Times yesterday, the 1970s?) Things are just GETTING REALLY BAD HERE right?

Meanwhile, on the page opposite this scary crime story in the Post, there's an article titled Crime Dips on Subway.

Subway crime dropped by 3 percent in 2008 -- marking a third straight year in which the good guys gained on the underground goons.

Robberies went from 796 in 2007 to 823 and rapes from one to three, but murders, assaults and grand larcenies all declined, according to NYPD statistics. 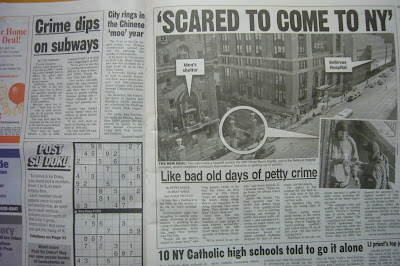 Previously on EV Grieve:
Noted
Returning to the scene of the crime
Posted by Grieve at 7:01 AM

What is all of this fear mongering? Its hilarious. Memories can be so short.