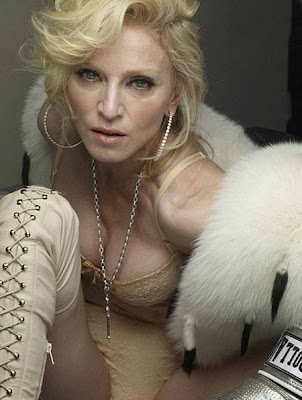 According to The Superficial: "It's like she walked on set and asked to look like Marilyn Manson, but less appealing to the eye. That said, this can't be selling CDs. Unless they come with razor blades, in which case, I'll take two."

Speaking of the former East Village resident...in case you missed this over the weekend... back in 1979, when Madonna was a struggling artist or dancer or something in NYC, she posed nude for $25. Now that photographer, Lee Friedlander, has the shot up for grabs at Christie's. It's expected to fetch $10,000 to $15,000, unless A-rod gets in on the bidding. (Christie's; maybe NSFW depending on where you work)
Posted by Grieve at 6:30 AM

please make her stop....when oh when will it finally end and everyone realizes that she has always been horrible........