From Tribe to tapas at First Avenue and St. Mark's Place 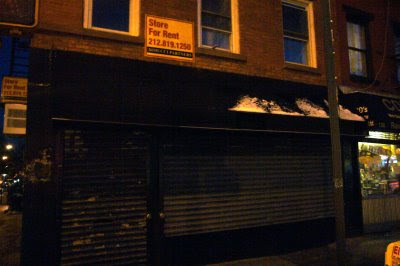 A tapas joint will open at the former space of Tribe on First Avenue at St. Mark's, Patrick Hedlund reports in his Mixed Use column in this week's issue of The Villager. According to Hedlund, Danny Rivera, owner of the Crooked Tree around the corner on St. Mark's, will launch the tapas bar in June.

"I'm a guy from the neighborhood; I've lived here for over 10 years," Rivera told Mixed Use. "My plan is to make the place for the community."

As you may recall, Dr. Tara Allmen owns the five-story building that housed Tribe, which closed in late January. As the Real Deal reported in early February:

Allmen, a physician, inherited the building from her mother, Renée Allmen, along with several other East Village properties, and recently completed renovating the four residential spaces in the building. She called Tribe "an eyesore."

"I want a classier place," she said, adding that Tribe "was not going to enhance the aesthetic of the building."

Here's what Allmen told Mixed Use:

Since it won't be a bank, I hope he remembers to have an ATM put in out front.

Tapas, isn't that spanish for ripoff?

Small plates are used so that it looks as if you get more for your money.

Funny that Tara's father was Rick Allmen the founder of the original beatnik, hangout the "Cafe Bizarre" in the east village, where Warhol found the velvet underground, it wasn't upscale for sure. Times have changed.