Today marks the 98th anniversary of the Triangle Factory fire...

The Triangle Shirtwaist Factory fire in New York City on March 25, 1911, was the largest industrial disaster in the history of the city of New York, causing the death of 146 garment workers who either died from the fire or jumped to their deaths.

The Triangle Shirtwaist Company, owned by Max Blanck and Isaac Harris, occupied the top three floors of the ten-story Asch Building in New York City at the intersection of Greene Street and Washington Place, just east of Washington Square.

Someone took the time to go around the neighborhood and honor the factory workers, most of whom were young immigrant women. 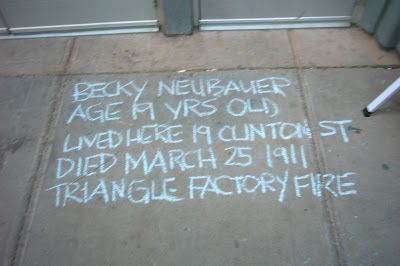 I don't know who takes the time to arrange all this (I saw five of these chalk tributes today...) but I'm glad that they do it...
Posted by Grieve at 6:50 PM

I'm glad they do it too, I saw three myself and all just on the walk to work.

One of the girls who worked in the factory lived in my East Village building. I only knew this because of the chalk notation that has appeared outside my building on the anniversary each year, although there wasn't one this year. I love that someone takes the time to remember the people whose lives were lost.

kudos to the individual doing this. As i have walked by the building where the tragedy occurred, it has always been difficult to imagine a factory up there even if it was almost a 100 years ago.
Shame that so many people that live here now are so uninterested in the history of the city.......

I'm with you, HG.... I did see people stopping and reading the chalk print on the sidewalk... I bet it inspired at least a few people to do look up Triangle Factory Fire on the Internet to learn more...(I'd like to think that, anyway...)

So it's now the chemistry building of NYU? Do you know how much of the original structure was retained? I can't imagine working in a place where that many lost their lives so tragically.

Hi Girl,
The factory occupied the top three floors of the 10-floor building...It's a good question: Why didn't the city raze the building after the tragedy?

An update: When I exited my building this morning, I saw that someone had indeed written a chalk note re: the young girl who lived in my building and perished in the fire. They must have done it later in the day or in the evening.