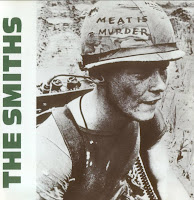 "MORRISSEY didn't break from his ardent vegetarianism at Webster Hall last night. The singer, whose second album with the Smiths was titled 'Meat Is Murder,' requested no meat products of any kind be in the building before, during, or after his performance. 'There were no deli sandwiches, sushi, pepperoni pizza or anything else that used to have a face,' laughs our source. 'Even the cleaning staff were happy to do their part by bringing in veggie sandwiches for lunch.'" (Page Six)

Should anyone really be eating sushi during a (rock) concert?
Posted by Grieve at 11:25 AM

"Should anyone really be eating sushi during a (rock) concert?"

What make people think that rock is anymore special than any other music genre, like 60 years later?
Very conservative music a lot of the time, beatles band configuration and all.
Rock on!

moz better not try to pull that shit at coachella.