First, my apologies for the lousy photo. It was dark out when I passed Kurve on Second Avenue at Fifth Street last night. (Uh, being night, it would be dark!) And no way could I use the flash, and alert the 38 people working at the Starship Thaiper...and risk being pelted with foie gras torchon (with red currant jam) and spicy king salmon tartare....

Anyway! The plant has been saved! It has apparently been picked up! 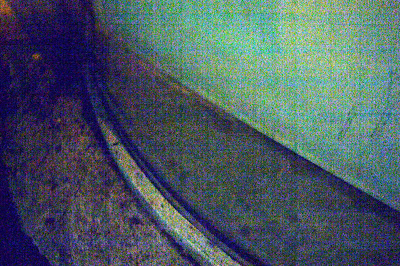 And previous to that previously! 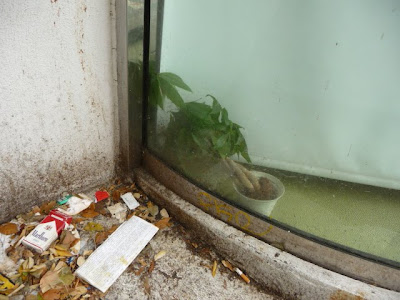 Thank you to all of you who helped make the rescue a reality! Another Michelin Star for them!

Previously on EV Grieve:
Despite hard-hitting expose, plant at Kurve worse off than ever
Posted by Grieve at 7:01 AM

i hate to say this, but isn't it possible the plant was not so much saved, but euthanized? as in, tossed in the trash?

Noooo! Don't say that! I bet the plant has a nice new perch in the sun...and receives plenty of sunlight and water and love and...

Yeah, you're right, probably in the trash....

I thought the basil on my tuna kratong-tong tasted a little off last night.

I've been having dreams about that damn plant. Thank you, now I can go back to the regular program of clown nightmares.

Did you look on the other side of the curtain? I did and it had been brought into the restaurant. Still in the corner but someone had kicked it over. Dirt everywhere, roots exposed.....oh the humanity

Wednesday night I walked by with a friend and noticed it had been guillotined by the curtain!!

So I'm sure one of the workers finally saw the thing and got rid of it.

Wish I would have taken a picture!! It was a sad sight..

Wow. Things must be getting even MORE boring in the EV these days. (I never leave my apt, so I wouldn't really know)